Would you drink Chinese wine? 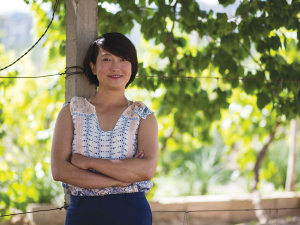 There are 48 million wine drinkers in China, making it one of the world’s largest markets. They are also large producers, and Lee Suckling asks the question, will China ever be realistic competitors in the market?

There are six main wine regions in China, Ningxia being the most talked about today. It’s gaining a reputation for red wines of quality, with winemakers like Emma Gao trying to change perceptions of locally-made Chinese wine within her country. “The image of Chinese wine is mass produced without much care, it’s not sophisticated,” Gao says. “I wanted to change that.” Gao’s vineyard Silver Heights is based in Northwest China, at the foothills of the Helan Mountains. It’s an area forming the border of Inner Mongolia’s Alxa League and Ningxia, which is protected by the namesake mountains from both Mongolian desert and freezing Siberian temperatures. The soil in Ningxia is dry and rocky, making it difficult to plant traditional crops such as rice and corn in. However, Gao’s family discovered it was ideal for grapevines. “For us it’s more important quality than quantity,” Gao explains. “My ambition was to start a winery with wine to stand with wine from Australia or California.”

In the first year Gao produced just 10 barrels because the area was so underdeveloped. Now, Silver Heights is spread over 70 hectares, and Gao’s 2009 “Emma’s Reserve”, a 100 percent Cabernet Sauvignon blend, is one of the most prized China-produced reds. When asked why she named the wine after herself, she reveals Emma is also her daughter’s name and she hopes to pass on her winemaking passion to her. “One generation is not enough to do wine well,” Gao explains. “We can only plant the grapes well. The next generation will continue to do better. I hope Little Emma’s “Emma’s Reserve” will be better than today’s wine.”

Kiwi winemaker David Tyney consults in Ningxia. He told NZ Winegrower there are currently 58 wineries in the area, with significant international investment coming in from the likes of LVMH and Pernod Ricard, who are keen on a piece of Chinese-made wine’s future. Thirty thousand hectares are planted but only 15,000 tonnes are being crushed each year. As Tyney notes, the Ningxia region has a long way to go: the young vines are not on stream and older plantings lack a good strike rate. Vineyards also lack marketing expertise to tell a palatable wine story.

But there are some diamonds in the rough. Grace Vineyard, which operates in the Chinese Shanxi province (and also has vineyards in Ningxia), celebrates 22 years in business in 2019. CEO Judy Chan says her wines are known as some of the best in China. “I think the biggest achievement for the winery is that we made something impossible possible: we built a family-owned winery that focuses on quality with a team who didn’t have any experience in the wine industry,” she says. Her primary vineyards located between Taihang Mountain and Lu Liang Mountain have 200 hectares planted. She targets the domestic Chinese market, and her initial goal was to create a business that didn’t harm the environment as much as traditional Chinese production. In the mid-1990s, a respected government official from Shanxi’s department of production materials told her that because Shanxi was severely polluted, it would be beneficial to the region to see more eco-friendly production in place. The region had already been criticised for producing fake alcoholic beverages, but Chan insisted in promoting Shanxi as part of her wine story and ensured her vineyards refused cheap bottling contracts from other brands looking to make quick money.

Chan received a lot of criticism and contempt throughout China in the beginning, but gradually wine professionals began to warm to her. Grace Vineyard received significant boosts in reputation when Cathay Pacific Airways and the Peninsula and Shangri-La hotel chains began to stock its wines. Chan admits that the climate of many parts of wine-producing China, which have hot and dry summers and moderate, humid winters, isn’t as favourable for winegrowing as it could be. It’s difficult to produce quality wines in Shanxi, let alone create wines that are distinct in Shanxi’s terrior (which is Chan’s goal). Like Emma Gao, Chan too hopes her daughter and granddaughter will push this closer to reality during the rest of the 21st Century.

Within China, around 80 per cent of all wine consumed is red and Cabernet Sauvignon is the most widely-grown grape, followed by Merlot and Carmenere. Most winemakers, such as Gao, study oenology in France and favour Bordeaux methods. With the likes of Gao and Chan put aside, China lacks enthusiasm to be a real player in the wine market. Only about 20 percent of its local product is exported. Increasingly, however, Chinese winemakers are using the expertise of scientists and wine professionals from other winemaking countries – like Tyney – to help improve their winemaking. Although deficiency in viticultural expertise was an early problem during the rise of modern-day Chinese wine (i.e. during the last decade or so), today lack of enthusiasm, investment or science isn’t actually what’s holding Chinese wine back.

Anybody who has visited China (and tasted what makes up the majority of locally-grown product) will understand that the quality and age of Chinese soil isn’t ready to make the complex flavours the Western wine-drinking world expects. Maturation can only improve with time, and despite quality exceptions such as Silver Heights and Grace Vineyard (both of which don’t focus on export), Kiwi winemakers can expect Chinese wines to remain rather flat and one-dimensional. As such, China probably won’t be serious competition in our lifetime.