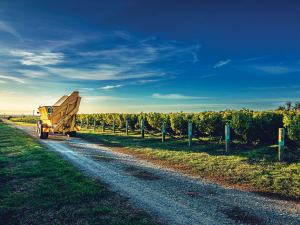 Marlborough Sauvignon Blanc yields and prices were similar this year to last, yet profit before tax is down 13 percent.

For the third year in a row, the profit before tax of the MPI/NZW Viticulture Benchmarking Marlborough model has shown a marked decrease.

The information which is based on data from 50 growers in the region, in a model of 30 producing hectares, shows profit before tax of $8,700 per hectare, which is 13 percent down on last year.

Greg Dryden from Fruition says those year-on-year decreases are “a worrying trend,” at the vineyard level. What’s most worrying is that the decrease is in spite of average yields and price paid for fruit being relatively stable between 2018 and 2019.

The only explanation for the continual decreases is vineyard expenses, which in 2019 reached $12,235 a hectare.

“That is up 31 percent over the past 10 years,” Dryden says. “Compared with yields being up just four percent, and prices up 10 percent since 2009.”
Labour makes up around 55 percent of all vineyard expenses, equating to $6,760 per hectare.

Increases in the minimal wage that took effect in April 2018 is one reason for the labour cost hike. The second increase came into effect in April this year, and currently sits at $17.70. By 2021 the government aims to raise the adult minimum wage to $20 an hour.

Dryden expects those future increases will have a similar impact to vineyard expenses, as those seen in the past 12 months.

Other vineyard expenses to show increases related to pest and disease management – mainly as growers battled against mealybug, controlling powdery mildew and dealing with trunk disease. There were also extra irrigation costs this season, with some growers having to pay for water to be trucked in, once the Wairau River irrigation takes were shut off in February.

The Marlborough model is heavily weighted with Sauvignon Blanc just as the region is, with the variety making up 78 percent of the 30 hectare representation.

The rest of the model is made up of Pinot Noir, Chardonnay and Pinot Gris. The overall average of all varieties showed a revenue per hectare of $24,350.

Sauvignon Blanc on its own, showed a revenue return of $26,000, with the average price per tonne being $1,855. Yields for Sauvignon were 14 tonnes per hectare, the same as 2018. However, the quality parameters appear to have been higher this year. Dryden says no grower suffered a penalty from their winery for low brix or disease this year. Seven from last year’s 47 growers suffered penalties, mainly due to disease.

Last year 1.3 percent of the model’s Sauvignon Blanc was on-sold due to surpassing the winery yield cap, at an average price of $990 a tonne.

This year only two of the 50 growers surpassed their yield cap, which meant 115 tonnes of Sauvignon Blanc or 0.6 percent was on-sold at an average price of $1200 a tonne.

Weather again played a role in vintage, but not in the way it has in the past two seasons. While rain and tropical cyclones hit Marlborough in previous years, 2019 will be remembered for its big dry. Cooler weather and rain during December however affected early varieties like Chardonnay and Pinot Noir, with yields much lower than hoped for.

The decrease in profit may now be impacting on vineyard sales in Marlborough. There has been a noticeable decline in sales in recent months, compared with the rush of buying two years ago. Dryden says the average model price of planted land in the Wairau now sits at $248,000 per hectare. In the Awatere that price is $165,000.

Looking forward, growers are cautiously optimistic about vintage 2020, forecasting a six percent increase in yields. They are also hoping for an increase in grape prices in 2020, to cover the increasing working expenses.