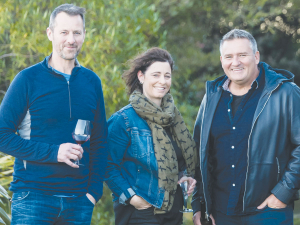 "We wanted to break the mould and reduce the expectations of long hours and stressful work as much as we could," says the Chief Executive of Marlborough Vintners, which introduced a four-day working week in August 2020.

Staff now work four nine-hour days a week, from July to January, but are paid for a full 40-hour week. That's about protecting staff wellbeing "and giving back to them and their families", says Kathryn, who was fully supported in the move by owner Ant Moore and General Manager Andrew Blake, who've got 60 years of wine industry experience between them.

A roster system means the contract winery remains open to its 22 clients five days a week, says Kathryn. "It's a win-win. We don't think there is anything being compromised; there are only benefits."

The focus is "overall wellbeing", she adds. "Studies show us that people can work hard and intensely for short periods of time, but you have to have downtimes."

And staff have responded positively to having a quieter period of the year in which to recover from a more "intense" six months, including the onslaught of vintage. "I have had staff say 'this had been quite life changing for me'," she says. "They are effectively recharging their batteries in those six months."

The leadership team was already discussing working hours when they saw the results of a Wine Marlborough survey in early 2020, which showed some people were working 100 days straight over vintage, as well as high levels of winemaker burnout. Thirty of the 99 survey respondents worked 85 to 96 hours a week over the vintage period, while another 16 worked more than 96 hours, within a handful toppling into 100 plus. The majority of respondents worked three weeks or more at a stretch during vintage. That reflected the reality experienced by Andrew and Ant throughout their careers, familiar with working up to 15 hours a day, seven days a week during long vintages, says Kathryn. "Although, we knew from experience, we were still shocked when we reviewed the data."

Earlier in Ant's career he worked in a large Australian winery, where a relentless five month vintage push was followed by a period of shorter weeks, giving exhausted teams a chance to rest and recover. That was informal and successful arrangement, which provided inspiration for the model now being used at Marlborough Vintners, he says.

Kathryn notes that many of the company's "amazing employees" have been there a long time, and frequently go "beyond the call of duty".

Following the November 2016 earthquake, the company had to undertake a major rebuild quickly, to meet the expectations of the 2017 vintage.

"Our staff banded together, worked long hours and without them we wouldn't have got through," she says. During last year's Covid vintage, staff once again rallied, she says. "Some having to live away from their families, in caravans on the winery site. They did all this with a smile on their faces and a great attitude." While those major events shone a light on their staff commitment, every vintage sees them put their "heart and soul" into their roles, with long hours and continued commitment, she says, pleased that the company is acting to improve quality of life for the people that give it so much.

Business has to evolve, "and this needs to include re-organisation of how we do things, remote working, flexible hours, working smarter not harder, and fostering a productive internal culture", says Kathryn. And she hopes it will help the company continue to sustain a workforce. "If they are happy we are going to retain them for longer, which is of benefit to us of course. We want everyone happy."

The 2021 East Coast Farming Expo is a two-day mid-week gathering (February 24-25) for sheep and beef producers with a focus on farming smarter. It’s held annually at the Wairoa A&P Showgrounds and includes exhibits, outdoor demonstrations and seminars.