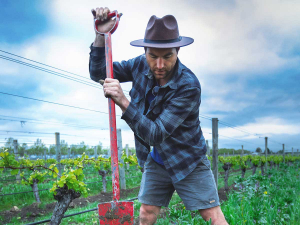 Delving into organics and regenerative agriculture has renewed Kurt Robinson’s passion for viticulture.

“There’s so much more you can sink your mind into,” says the Viticulturist at Rimapere Vineyards on Marlborough’s Rapaura Rd, where decades of sheep, fruit and grape growing have demanded much of the soil, and given little in return.

Seeking a natural recovery, Kurt planted the whole vineyard in cover crops last May, with plantings devised to fix nitrogen, add bulk matter, break up the soil, and draw down CO2. When the plants had set seed, they crimp rolled them multiple times, laying a mulch between the rows. “That created a little microclimate in the spring,” says Kurt, who was delighted to see the rapid proliferation of mushrooms, mycorrhizae and bacteria in the soil.

Come spring they planted wildflowers in alternate rows, to attract beneficial insects and wasps. “This past season was about trialling everything,” says Kurt, who will adapt the plantings this winter. “The biggest thing for me about doing it last year was just how much was going on. Sometimes vineyards can be quite sterile in Marlborough - everything is mowed to within an inch of its life,” he says. Instead, he found an abundance of life, including an “insane” number of earthworms.

It’s the beginning of a journey to revitalise the land, and part of Rimapere’s commitment to improving the terroir for generations to come, he says. “We want to know we have put in everything we can, and leave it better than when we started.”

Functional Complementarity: Down the pathway of regenerative viticulture

Robert Holdaway sees science at work when he harvests a salad for dinner, plucking rocket, spinach and beetroot leaves from his Lower Wairau Vineyards.