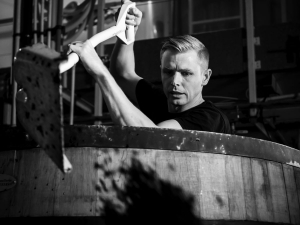 Sulphides were on the table at this year’s Southern Pinot Noir Workshop, in an online pod event involving winemakers throughout the country.

“This is such a massive topic in New Zealand,” says organiser Lynnette Hudson, noting that a ‘Dissecting Sulphides’ presentation from Auckland University’s Dr Bruno Fedrizzi had attendees “mesmerised”.

It’s a “huge topic”, she says. “There is so much we need to take on board and so much we still need to learn and grasp.”

That definitely has consequences in the winery, says Rose Family Estate Winemaker Nick Entwistle, who helped organise the Blenheim event. “There is more conversation about the formation of sulphides – both in terms of the trend for increased sulphides in Chardonnay, but then also with the increase in disease pressure from powdery mildew, and the subsequent increased use of sulphur in the vineyards,” he says. “We are starting to see a flow-on effect in terms of fermentation.”

One of the wines tasted at the event had definitely been impacted by vineyard treatments, “and there’s almost nothing the winemaker can do in the winery”, he says. Bruno’s research – yet to be completed – is therefore “ground-breaking and timely”, says Nick, who hopes it will provide winemakers a better ability to understand the peaks and troughs in fermentations, and be able to react in a timely manner. “The ideal is to have a toolkit where you see precursor compounds, which can indicate the potential for an issue down the track and fix it before you get there.” There was an “excitement in the room” as people recognised that some of the data coming out of Bruno’s work – partly funded by Bragato Research Institute’s Pinot Noir Programme – could be key to “a really positive change in their decision making”, says Nick. “My vision for New Zealand Pinot Noir is that everyone thinks about this type of research and sees that it is really valuable for them. And it really is.”

The Southern Pinot Noir Workshop is traditionally held in Hanmer Springs, but was adapted to an online event due to the implications of Covid-19 restrictions. Companies sent Lynnette and Bruno wine samples with sulphide issues, which they tasted and analysed, in order to choose six that best suited the presentation. Samples were then sent to all the regions involved in the workshop, where pods of up to 30 winemakers and viticulturists gathered to discuss and learn.

The winemakers behind the samples gave a brief description of the issue present as well as the likely reason. Bruno then talked about his findings, before the wines were tasted and discussed by each group, followed by regional reports to the entire online gathering.

Nick applauded the concept of tasting pre-analysed wines, alongside “talking points” from Bruno - such as the ways particular types of sulphides form, whether due to the vineyard, nutrition, temperature or turbidity.

That’s just one of the silver linings of moving online, with another advantage the fact that winemakers could easily attend at a busy time of year, Nick says. “Getting that information quite quickly and succinctly was great.” And Bruno is an excellent ambassador for New Zealand Pinot Noir research, offering insights that winemakers can relate to, he adds.

Lynnette says despite the success of the virtual event, the workshop will “definitely” be back in Hanmer Springs when possible. There was a great deal to take on board with the 2022 topic, and a three hour session could not do it justice, compared to the potential of four days together discussing the wines, science and individual experiences, she says, also noting the networking value of the Hanmer Springs event.

The Whole Bunch: A virtual kōrero about Pinot

Covid-19 alert levels have seen The Whole Bunch Pinot Noir symposium shifted from September to February 2022, but the ideas kept flying via a virtual kōrero.