Celebrating 200 years past and future 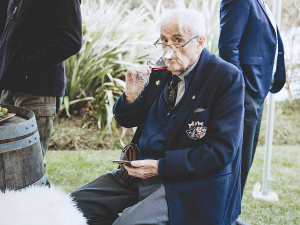 Two hundred years ago, the very first grape vines were planted into New Zealand soils by Reverend Samuel Marsden at the Church Mission Society in Kerikeri.

Remarkably, Marsden profoundly noted in his diary, “New Zealand promises to be very favourable to the vine, as far as I can judge at present of the nature of the soil and climate. Should the vine succeed, it will prove of vast importance in this part of the globe.”

Marsden was the driving force behind the establishment of Anglican mission stations in New Zealand in the early 19th century and had brought the vines with him from Port Jackson.

“His motives may well have been shaped by a desire to cultivate his own wine – either for communion, or more likely, to express his own social aspirations,” says the Manager of the Kerikeri Mission Station, Liz Bigwood.

By 12 October 1819, many of the Marsden’s vines were in leaf. However, the vineyard was inadequately fenced, and it was soon destroyed by goats. His own efforts may not have worked out, but his predictions for the future of New Zealand wine couldn’t have been more successful.

The bicentenary was marked with an intimate industry celebration where it all began in Kerikeri. NZW Board Chair John Clarke made note that New Zealand is one of the very few countries in the world where the exact date of the planting of the first vines is known. “It is extraordinary to think that we know this date. It is fortunate that Marsden along with many of our early pioneers recorded such events in their diaries, and so 200 years later we are privileged to celebrate this historic moment in time.”

The event began with a ceremonial replanting of a vine at the historic Stone Store. Clarke, Rod McIvor - Winemaker, Marsden Estate, and Sherry Reynolds - Manager (Northern Region), Heritage New Zealand had the honour of planting the vine, christening it with bottle of Northland’s The Landing Syrah 2015.

The evening continued to the Waitangi Treaty Grounds, where guests were welcomed on to
the Marae with a moving pōwhiri.

It is extraordinary how New Zealand wine is so intrinsically linked to New Zealand history. Not only is Waitangi the birthplace of our nation, but James Busby, the architect of the Treaty, was also our first recorded winemaker.

The coming together of cultures and people was a special part of the celebration. Marsden’s work and that of his missionaries helped build a relationship of trust with Māori chiefs, paving the way for the acceptance of an official Crown presence in New Zealand.

Many other cultures have influenced the course of New Zealand wine too. Notably French, Croatian, German immigrants have had a key role in various wine regions in our industry. Many of these pioneer’s descendants were represented at the Marae.

The event wasn’t solely focused on the past. It was clear from the speakers that our industry is determined to celebrate another 200 years, through a commitment to sustainability, in the truest sense of the word; retaining talent and workers, guardianship of the environment, innovation of technology, advocacy and premiumisation of our wine.

An initiative to foster young leaders and the sustainability of the industry was announced by Leadership and Communities Manager Nicky Grandorge.

It will be open to current and former finalists in the Young Viticulturalist and Young Winemaker of the Year programmes, Women in Wine mentees, and select nominees from each region. The theme for 2019 will be ‘Next Steps in Sustainability’.

Young Viticulturalist Northland winner Jake Dromgool received a standing ovation for his speech on behalf of those young leaders emerging in the industry. He noted we are the custodians of a gifted land that has now been proven to make great wine across all our regions.  And he challenged the industry to keep asking ‘what next’, warning of complacency and over-commoditisation. “We must have the foresight, to make decisions today, that will allow us to continue to adapt and evolve alongside our ever-changing climate and market landscape.

“It’s both a daunting and an incredibly humbling task for others such as myself to carry on this legacy for the next 30 years. Today we honour the vision of Samuel Marsden and every other early pioneer, and in the next 200 years, if we may see further in the distance, it is only because we stand on the shoulders of giants.”

Clarke spoke of the optimism of our industry, “there is always another vintage, another year.” But to make that optimism a reality, we must “treasure and sustain the places that produce our great wines… develop the potential of our people… And finally, we need to always be open-minded, to embrace the pioneer spirit that has served as so well to date.

“Do these things well and in 200 years’ time on September 25 2219, someone will be able to stand here and speak with pride about the success of New Zealand wine, and what it has done for this country and its people over 400 years.”

Witnessing the ceremonial replanting in that same spot as New Zealand viticulture and history began, in the presence of a diverse crowd of pioneering families and future leaders was a humbling experience. Understanding your past is vital to shape your future, and it is exciting to think of what the next 200 years of the New Zealand wine industry could behold.