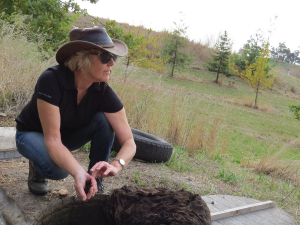 Gracie is no ordinary Jersey, admits Jan Johns, whose raised her from a calf and considers her part of the family. And though looking like she's not got a care in the world, head cocked in expectation of warm words and fresh hay, Gracie plays a remarkable role at The Wrekin, as the sole source of poo buried in cow horns.

The Wrekin is not certified biodynamic, but cow pat pits, and the rhythmic - then chaotic - stirring of preparations, according to the lunar cycle, are key to this extraordinary property. On the surface, visitors to The Wrekin see a happy cow and a picturesque patchwork of vines, interspersed with an olive plantation and duck-laden pond, park-like hillsides of oak and sequoia, groves of native trees, and a backdrop of golden hills, where Jan and her husband Andrew farm beef and superfine merino.

But beyond the naked eye are vine roots that dive deep, thanks to being mostly dry-farmed; a supercharged microbiology, thanks in large part to Gracie's poo preps; a line of buried barrel and brick compost brews, metamorphosing manure, eggshell and basalt; and a thriving earthworm population beneath the vines. "The soil is alive, and I think the place is more alive," says Jan. "The soil is better, and we think the grapes are better."

The Johns bought the land in 1997, moving from city lives soon after to satisfy Andrew's life-long desire to go farming. They were drawn by the sculpted tawny hills, by an 1873 homestead that recalls the days of settler farmer, and by 2,000 olive trees, which seemed a good prospect at the time. They soon realised the romantic dream of growing olive oil was a world away from the reality, although the olive harvest is now a key event in their calendar, with friends and family gathering beneath the trees.

Fortunately the land had much more to offer than olives and grazing. They'd not long been at The Wrekin when Ivan Sutherland - a pioneer of Marlborough's wine industry - dropped Andrew home from a sailing mission in the Marlborough Sounds and looked at the gentle hills around the homestead. "He said 'you should put grapes in here'," says Jan.

They looked into research, talked to winemakers and in 2002 planted 10 hectares of Pinot Noir, determined to develop the land without disturbing the fragile soil structure. Viticulturist Jeremy Hyland helped in the design, carefully selecting an elaborate array of 10 clones and numerous root stocks to mitigate the variation of slopes, row direction and aspect. He's continued to do that as The Wrekin has expanded into other varieties - Chenin Blanc on a hill above the pond and Chardonnay in a space ceded by olives - with rows and varieties selected according to contour and aspect. "It is definitely one of the most complex vineyards in the country", says Jeremy, who clearly adores its every corner.

Jan has always been interested in organics, but didn't start working towards certification until 2012, because wine companies weren't interested in organic fruit, associating organics with "messy" vineyards and bad wine, "and all that carry on," she says. "In those days people thought orange stripes down vineyards were cool."

That was still the case when she attended a biodynamics course to extend her own knowledge, and was urged on by an inspiring lecturer, who explained that it wasn't enough to do organics for herself, "we had to do it for society". Although Jan was already well down the "pathway of organics", The Wrekin needed some "oomph" to get certified, and to delve deeper into biodynamic practices, she says. "And Jeremy is the oomph I needed"

The viticuturist has been involved since 2001, but joined the Johns full time in 2017, a year before certification. He had long been "intrigued" by biodynamics, and spent time with New Zealand's biodynamic godfather James Millton while working in Gisborne. "But I never had the time to do it - I never made the time to do it," Jeremy says. A health scare in late 2015 gave him at the time, and also made him look differently at the other places he'd worked, and the fruit he'd sampled over the years, "Now I feel queasy when I smell chemicals."

He notes that organic certification can be achieved "by doing nothing" except excluding chemical inputs. At The Wrekin, "nothing" has been powerful - with no earthworks, no water (unless vines are in peril) and no chemical inputs since 2012. But biodynamics is about working up from that, and working to improve, says Jeremy.  "I felt it was the natural way to go - the next step if you like."

So he brought his 'oomph' to the operation, and in turn is fed by the enthusiasm of the owners, staff and visiting vintage workers, and by the classes of biodynamics students who come to see the work being done at The Wrekin. "The energy feeds off itselt," says Jan. And the proof is in the pudding, with a 2018 survey revealing The Wrekin's earthworm count higher than any other organic vineyard in the country.

Winemaker Hätsch Kalberer used The Wrekin fruit at Fromm and makes The Wrekin Pinot Noir for the Johns' own label. He calls the Upper Fairhall Valley vineyard one of the rare estates that is not a monoculture. "There's a vineyard here and a vineyard there, and a lake between - it's very thoughtfully put together," he says. "You can see that there is someone at the other end that really cares."

As soon as they had certification, people like Hätsch were "knocking on our door", Jan says. "I didn't know that would happen." She converted to organics for philosophical reasons, "but now it's expected premium wine will be organic". She loves that these days winemakers show up to stir a preparation and talk thoughtfully about the moon and microbiology.

Jan also loves the science behind the biodynamic principles they follow, "which I didn't understand before", and the sharing community it has attracted. "They are expansive outward thinking people, who are also caring for the planet," says Jan. "Biodynamics is way more about soil science and taking it to the nth degree than we ever though. And it just makes sense."

Making wine on site was a natural step at The Wrekin, where a small gravity fed winery is now tucked into a hillside surrounded by wines.

That means winemaker Hätsch Kalberer can process fruit within cooee of the harvest, protecting the microbiological signature of this biodynamically farmed land, and offering more flexibility and resilience to the operation.

The winery was built last year, but shipping delays (including one box remaining in a French port) meant they just squeaked in for the 2022 harvest, says owner Jan Johns. "The basket press arrived the week before harvest started." Other necessary equipment arrived after harvest, but in time for fermenting, she says.

The winery started small, with seven tonnes of fruit processed for The Wrekin's own label this year, given the nick of time nature of the equipment arriving, says Jan.

Designed to leave as light a footprint as possible, the winery is "very basic", with wastewater used on the land, grape marc composted on site, and no need for trucks to come and go.

Meanwhile, it allows those working on the land - "all fascinated" by winemaking - to follow their fruit through the process, "in a European sort of way", says Jan, herself intrigued by the simplicity of turning good grapes into good wines.

Clicking on to climate action

Yealands and a global effort to decarbonise wine

Greystone steps up to Toitu carbonzero

Pekin ducks diligently snaffle grass grubs on a Wairarapa vineyard, while sheep graze an array of species growing beneath the vines.