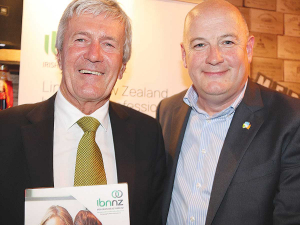 New Zealand is looking to Ireland for support as it negotiates a Free Trade Agreement (FTA) with the European Union (EU).

Trade and Export Growth Minister Damien O’Connor made this comment at a recent gathering in Wellington where he officially launched the Irish Business Network NZ (IBNNZ) report.

O’Connor told the large gathering, held in an Irish pub in the city, that NZ was not going to be a competitor in agricultural trade with Ireland.

“We will be friends and partners with the occasional bit of competition,” he said.

“The reality is that we share a lot around our culture and around agriculture, our connection and our passion for land and the fact we are both trying to build our export focus with thy finest food in the world.”

O’Connor says connecting Irish and NZ businesses is very important and the opening of the NZ embassy in Dublin and the Irish embassy in Wellington has done much to formalise the contact between the two nations.Ireland’s ambassador to NZ Peter Ryan hopes that NZ and the EU will negotiate an FTA, which he says will help the NZ/Ireland relationship to flourish and that the agreement will be beneficial to both countries.

“The opportunity for both countries to do business with each other has never been greater than it is right now,” he says.

“My message to Irish people is that if you meet a Kiwi businessperson, tell them how easy it is for them to do business in Ireland and open your network to them.”

Ryan says about one in five New Zealanders (approximately 600,000) have Irish heritage and the cultural and personal links between the two small nations is huge.

He says the way the people of the two nations do business is very similar.

Ryan claims the great thing about IBNNZ is that it is business led and all the people involved are volunteers who are committed to building stronger business ties between the two countries.

IBNNZ was established in Auckland in 2015 and now has a membership of more than 1500 based in Auckland, Palmerston North, Wellington and Christchurch.

It also works with other Irish trade organisations such as Enterprise Ireland, Invest Northern Ireland, IDA Ireland and Tourism Ireland.

As well as holding regular networking events, IBNNZ has also run a series of webinars promoting and encouraging collaboration between the two countries.

Call for new commissioner for animals

Animal rights group SAFE and the New Zealand Animal Law Association (NZALA) have written an open letter to the Prime Minister asking her to appoint a Commissioner for Animals.

A mate of the Hound’s wonders just how Agriculture Minister Damien O’Connor is getting along with his 2IC in the agriculture portfolio Meka Whaitiri.

Minister zooms in on trade

Damien O'Connor in his dual capacity of Agriculture and Trade Minister, officially launched a 250 page report on barriers to horticultural trade before a group of about 60 industry representatives in Wellington last week.