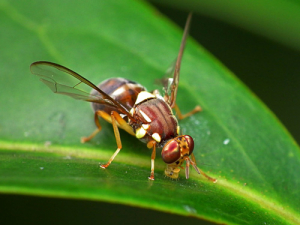 The larvae were found earlier this month in an undeclared mandarin carried by an Australian passenger arriving from Melbourne. They have since been confirmed as Queensland fruit fly – regarded as one of the worst horticultural pests in the world.

"One of our quarantine officers detected the fruit when the passenger's bag went through an MPI biosecurity x-ray machine. Another officer discovered insect damage on the mandarin and pulled the skin off, finding the larvae nestled inside," says Andrew Spelman, MPI border clearance manager, Central and South Region.

"Keeping fruit fly out of New Zealand is one of our highest priorities. The Wellington interception shows the value of MPI’s biosecurity x-ray technology, which has been upgraded over the past few years."

So far this year, MPI staff have made 11 fruit fly interceptions at the border.

MPI checks all produce seized from arriving passengers for signs of pests or diseases, says Spelman. It also checks organic material disposed in MPI amnesty bins at airports and ports.

The Australian traveller received a $400 fine for failing to declare the mandarin.