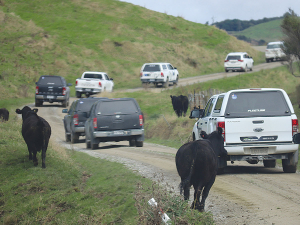 A 250-strong crowd turned up to the Whangara Farm field day earlier this month.

“The huge turnout to our field day has blown me away.”

That’s the response of the chair of Whangara Farm, Ingrid Collins, to the 250-strong crowd that came to see their property, a finalist in this year’s Ahuwhenua Trophy for the top Māori sheep and beef farm.

Field day visitors were welcomed at the local marae located 100m from the beautiful East Coast beach where the movie Whale Rider was filmed.

After the welcome, a convoy of 4WD vehicles took guests on a tour of some key parts of the farm where they saw prize Angus cows and the farm’s Romney sheep. Lambing percentage on the farm is 145%; calving of mixed age cows is 94%.

By a special radio system the farm manager, Richard Scholefield, broadcast a commentary from his vehicle, heard by visitors in their vehicles. At two stops Scholefield and other staff talked about various aspects of the farm and their goals which include producing a ewe flock that is facial eczema tolerant and whose wool is higher quality.

The visitors saw the farm’s flats and steep hill country, getting spectacular views of hills and coast.

Later, Scholefield and other staff gave formal presentations about the farm in a hall near the marae and took questions.

Ingrid Collins, chair of the farms for 13 years, expressed amazement that so many turned out.

“I didn’t think we would get so many people here,” she told Rural News. “When we had our own field day in February we had 164 turn up. We had said we may get 200, but there were easily that and more today.”

Collins is proud of the three Māori incorporations’ cooperation in forming Whangara Farms. She said it isn’t always easy to get Māori to work so well together. The farm board has a representative from each incorporation and two independent directors.

“The reason we only have two independent directors is so that we are never overruled by the independent people,” she says.

Collins assured the field day attendees that Maori can be very successful in a regular farming operation.

She is full of praise for manager Richard Scholefield whom she says has done a wonderful job on the farm and has embraced all the key Māori values.

“We can show here that this is not only a good Māori farm, but that it equals or is better than any other farm in the country,” she says.

The Whangara Farms field day is the first of three running in the next three weeks.

The winner of the competition will be announced at an awards night in Gisborne on Friday May 24.