Digging the dirt on avocados 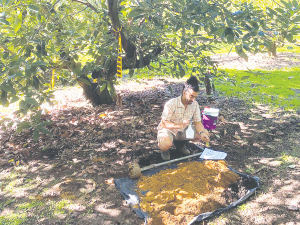 The avocado industry is one of New Zealand's horticultural success stories.

In 1939, fruit from nine avocado trees, raised from seed, were sold in Auckland. More than 80 years later there are now 4,000ha of avocado trees bringing $234 million into the country each year.

Around half of the orchards are in the Bay of Plenty area, with large pockets around Whangarei and in the Far North, including 500ha of new plantings in the last five years in the Far North and 400ha at Tapora, west of Wellsford in north Auckland.

"Increasingly, growers are becoming interested in their soil biology as a potential avenue for productivity," says Phillip West, research director with NZ Avocado's research programme. "But they don't yet have a benchmark for what an avocado soil should look like."

Setting that benchmark was the intention of he High-Performance Soils for Avocado project - funded by Our Land and Water's Rural Professionals Fund.

A typical orchard might produce around 10 t/ha of fruit of each year. But some regularly produce more than 15 t/ha. While others nearly double that, regardless of which area they're in and general soil make-up. There are high organic matter soils in the Bay of Plenty, more clay in the Mid-North and sandy soil in the Far North.

Tony Bradley, NZIPIM-registered consultant and head of orchard management company Aongatete Avocados, consults with 65 orchards in the Katikati/Tauranga area and some participated in the trial. He believes the industry needs to be heading toward more sustainable practices to enhance their image in the market.

"We all have slightly different recipes. So, creating the benchmark of what a good high-yielding orchard soil looks like is an important start," he explains. "From there, they can look at nutrient loss and nutrient performance within those high-yield orchards and how it affects fruit quality."

For former grower and now NZ Avocado project and sustainability manager Sarah Sorensen, who oversaw the project, issues like compaction and nutrient manipulation were of most interest during her orcharding days.

"The current interest in soil biology is showing how quickly the industry is evolving," she says.

Heather and Gavin Chapman have a low-yielding 4.2 ha orchard with good quality fruit at Bethlehem near Tauranga. They have trees planted on raised humped rows to help drainage. They only mow the orchard four times a year to reduce compaction and allow grasses and weeds to flower for the bees, as well to retain soil moisture in the orchard overall in summer.

Aside from these things, they generally follow industry guidelines for orchard management and input regimes.

The Chapmans were keen to find out what makes the higher-yielding orchards tick.

"We need to understand the relationship between the quality of our soils and our productivity and impacts of the inputs that we make," Heather says. "We might be benefiting our crop, but if you're actually causing the soil to deteriorate that's not a sustainable situation either."

Some 29 orchards were investigated for the project (16 were high-yield producing over 15 t/ha average over four years and 13 were low-yield at under 15 t/ha). There was good data already for 17 of the Bay of Plenty orchards, gleaned from being part of an earlier 'Avovantage' project.

Two additional high-yielding orchards in the area were trialling new cultivars. Five high-yield orchards from both the Mid-North and the Far North were also included.

Including all data in a machine learning algorithm showed that no single biological or nutrient variable could be used as a statistically significant identifier of crop performance.

While orchard management practices were not part of the project, the results suggest some correlations may be a result of management on high-yield orchards, rather than from soil characteristics.

Although the data did not show any significant results, it can be used to refine future studies. Data from the 17 orchards that participated in this project will be incorporated into the Avovantage project to understand how soil variables, as well as leaf and fruit nutrient concentrations, influence fruit rot.

This article is courtesy of the Our Land and Water National Science Challenge.

Australian growers want their consumers to buy home-grown avocados and ditch imports from across the ditch.

Another bumper year ahead?

Avocado growers are looking forward to another bumper year despite the global economic uncertainty.