Off and running with Zespri! 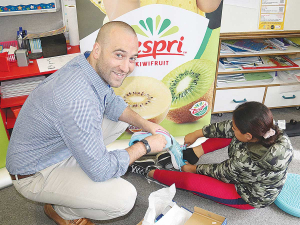 Twenty-one students from a class at Hutt Valley’s Rata Street school, a decile two school, were among two classes in the country singled out to receive a new pair of ASIC shoes each from Zespri.

As well the running shoes, the kids were also given special lunchboxes and kiwifruit courtesy of the kiwifruit marketer.

The programme is the brainchild of Kim Harvey, a health and fitness expert. Harvey set up the charitable trust, which has been running for the past three years, with the support of a number of sponsors – including Zespri. Several key sports people are also involved in promoting the scheme as ambassadors – such as All Black star Ardie Savea, NZ cricket captain Kane Williamson, Silver Fern netball captain Ameliaranne Ekenasio and long-time NZ hockey player Samantha Charlton.

Harvey says a total of 760 classes around the country are involved in the programme and the aim is to encourage young people to adopt healthy lifestyles at an early age, which they will hopefully retain throughout their lives. She says this is better than trying to change habits later in life.

“The children are all in a class team and what we are trying to do is immerse them in the habits to drink more water and eat fruit and veggies on a regular basis,” Harvey told Hort News.

“By doing this in their everyday life, each student earns points and as a class they log into the data base and track their performance. The points they earn allow them travel around the world virtually by creating their own little animated avatars. They are guided on this journey by the ambassadors. It’s a really fun experience and they can, in a virtual sense, visit some exciting places.”

Harvey says it’s a great way to introduce and motivate children into adopting healthy lifestyles. There is no winner for five week programme, but Harvey says the winning is about changing lifestyles.

Michael Fox of Zespri agrees and says the aims and values of the project matches Zespri’s focus on supporting communities in NZ and around the world.

He says Zespri is always looking for great initiatives that support their values, such as creating healthier communities and a better environment.

“It’s just something that fits with this and it teaches young people to eat well, live well and look after the environment – all these things are really important to Zespri,” Fox told Hort News. “We just want young New Zealanders to succeed and do well and build these really good habits. To have 20,000 children from 760 classrooms around the country involved in the programme is perfect for us.”

Fox says they want to encourage as many people as possible to eat kiwifruit as it is an incredible fruit and goes with that healthy lifestyle.

“We also want to see young people eating other fruit and vegetables and involving themselves in exercise,” he adds.

“What we really like about the programme is that it’s helping children build really good habits early. Also, they are going to take these skills back home to their families and hopefully get their families as well to take the message.”

There was an air of excitement in teacher Trish Hereaka’s classroom at morning playtime as Zespri staff set out lunchboxes and arranged the shoes that were to be given to all the class.

A brace of politicians recently hit Zespri’s Mount Maunganui headquarters to kickstart the already announced Agritech Industry Transformation Plan after a three-month delay due to Covid-19.