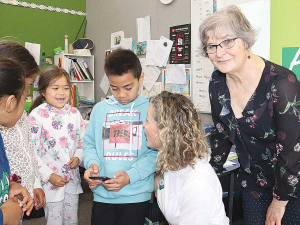 There was an air of excitement in teacher Trish Hereaka’s classroom at morning playtime as Zespri staff set out lunchboxes and arranged the shoes that were to be given to all the class.

The children had some idea – as they had to give their shoes sizes to Trish, so that they got given shoes of the correct size.

When the children finally arrived in class they found a lunch box on each of their desks and after a brief talk from Kim Harvey and Michael Fox the shoes were handed out.

Excitement reigned as the boxes were opened and the shoes tried on.

Hereaka has been involved in the Zespri challenge before with another class and decided to do it again with this year with her new class. She says children being healthy and making healthy choices is really important to her.

“I like the fact the challenge encourages children to run around and do other things, rather than being on devices all the time,” she told Hort News.

“That’s really good for children. I hope that, even when it’s over, they will continue on with these good habits.”

She says it was a very special day and the kids were ecstatic.

“The shoes a really cool and there will be some envious other kids at the school when they see my class running around in their new shoes,” she says.

Hereaka says working in a decile two school means that money is an issue for many parents and the school provides lunch for some children. They get fruit and until the end of the year also get milk.

Hereaka says participation is some sporting activities can also be a barrier to families, with the cost of fees and equipment. However, she says some local clubs are helping with special free programmes for the school.

Top of the class!

Hoek was presented with his award at the recent annual Massey University agricultural graduation function by Emma Simpson from Zespri International, who coincidently won the same award a year ago.

Twenty-year-old Hoek hails from nearby Feilding and was brought up on a cut flower nursery. He completed the horticulture major of the Bachelor of Agri-Science degree, which has now been replaced by the Bachelor of Horticultural Science degree.  In mid-2019, he was selected to go on an industry-funded 15 day tour of The Netherlands, Belgium and South Korea, which helped increase his interest in production horticulture.

Currently, Hoek is following an interest in seed production and vegetable breeding. Next month, he starts a 6-month internship with the seed company Barenbrug in Canterbury.

Hoek was also placed second in the academic prize list for third-year students.

Off and running with Zespri!

Twenty-one students from a class at Hutt Valley’s Rata Street school, a decile two school, were among two classes in the country singled out to receive a new pair of ASIC shoes each from Zespri.

A brace of politicians recently hit Zespri’s Mount Maunganui headquarters to kickstart the already announced Agritech Industry Transformation Plan after a three-month delay due to Covid-19.