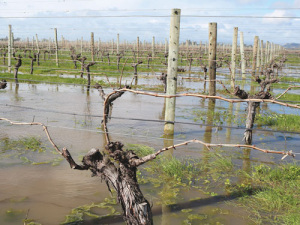 The sheer size of this puddle shows how wet it has been in Marlborough over winter.

Water, water everywhere is becoming the catch cry of vineyard owners in Marlborough, given one of the wettest eight-month periods recorded in 30 years.

Between January and the end of August, Blenheim recorded 623.4mm of rain. That is just 23mm below the long-term average for an entire year.

It began in February – the wettest February on record -  and it feels as though it hasn’t stopped. That is causing headaches for grape growers throughout the province.

You only need to fly over Marlborough to see the effects of all that precipitation – large puddles that are not dissipating.

In areas near the hills and out towards the coast, large tracts of vines have been sitting in water for months on end. Just when things start to look as though they are drying out, another heavy rainfall occurs.

So what is the prognosis for growers, as the vines head towards bud burst?

The most major of those is the inability for heavy machinery to get in among the vines, to mechanically strip and spray.

“If you can’t get in and do the herbicide spray till flowering, you might have very strong weed competition, not necessarily for water, but for minerals. That lack of minerals can limit your yields. If you don’t have enough boron in your soils you would normally do a boron spray. But if you can’t get machinery in between the rows because of water logged areas, you might end up with bugger all set in your block.”

Thickets of grass undervine are already thriving, and when the warm weather comes, as it inevitably will, they will thrive even more. As the photos show, the puddles in some vineyards are extensive, in some cases up to 15cm above ground level, so it is going to take a long time for these areas to dry out.

“Driving heavy machinery over sodden or muddy soils isn’t great, as you compact the soil permanently and it is very hard to bring it back from that,” Krasnow says.

The second danger facing growers is the potential for fungal diseases such as Cylindrocarpons to get the upper hand. Krasnow says the fungi which is found in many soils throughout the province, is opportunistic.

“It is looking for a vine to be on the back foot and in a very water-logged soil you have that situation. Those water-logged roots are less able to get energy from the sugars they burn. Some of that energy is used for growth, some is used for extracting minerals from the soil, but some is also used to fight off pathogens. If you diminish the sugars those roots are able to burn, you diminish the ability to fight back against or outgrow the fungus.”

The one piece of good news though is that the potential for vines to die due to being water logged, isn’t as high as might be expected.

In a herbicide reduction block he has been monitoring for the past two years, he saw the effect of long-term water logging in 2017. The puddle was still there after bud burst, and he expected a large number of vines would die as a consequence of not having enough air around the roots during the initial growth phase, which is powered entirely by stored reserves that require oxygen to burn.

“I had assumed that a vine that had spent the entire winter underwater and was still underwater when the roots woke up in spring, might get a tiny bit of budburst and then the vine would run out of oxygen to generate energy. But that is not what we saw. These vines were under water until well into November and yet they were still alive. They weren’t happy, they had shorter shoots and were yellow in colour because the roots were having trouble picking up minerals, but they hadn’t died.”

The wet winter has already had impacts on the Marlborough wine industry. Some growers were still waiting to finish pruning in mid-September, with bud burst just around the corner.

In some places Klima stripping hadn’t been possible, because driving heavy machinery over sodden or muddy soils wasn’t viable.

Solution wise, he says drainage is the only real solution. But in areas of high-water tables, which there are a few in Marlborough, that scenario is unlikely to be possible.

The only good news is that Niwa is predicting a drier spring and summer, which is certain to bring a smile to growers facing water logged vineyards.