The on, off again walking track 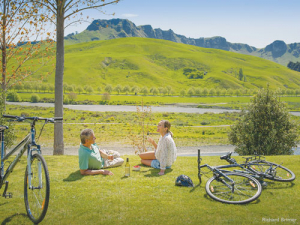 Nearly one year on from a rocky start, the Craggy Range Te Mata walking track saga appears to be on the way to completion.

The winery and local iwi have agreed to purchase land adjoining the initial, controversial trail and to work towards putting a replacement in its place.

The 2.4km walking track was constructed late last year on the eastern face of Te Mata Peak, a local landmark. Local opposition to the track, which starts close to the Craggy Range cellar door and climbs to the Te Mata ridgeline, began soon after its construction, with some members of the community questioning the consent process and protests outside the winery. Ngahiwi Tomoana, chairman of local iwi, Ngati Kahungunu, called the track “an eyesore”.

Conversely, the track also garnered sizeable local support, with three local residents (one a previous Hawke’s Bay Winegrowers board member and local viticulturist Xan Harding) setting up the Te Mata Peak Peoples’ Track Society. Supporters of the track claimed to have gathered over 20,000 signatures from locals wanting it to stay in place.

However, the project was put on hold and the track subsequently closed. It was slated for removal. Then, in a move that promised to reduce tensions between the two factions, Ngati Kahungunu and Craggy Range announced in May that they would jointly purchase an additional 28ha of adjacent land and remodel the track.

“We never intended to alienate or divide any part of our community by developing the public track,” Craggy Range CEO Mike Wilding told NZ Winegrower. “During the resource consenting process we were assured that Hastings District Council’s Iwi Liaision would engage with the appropriate members of Mana Whenua as part of the consenting process.

Unfortunately this process fell down somewhere. The disappointing thing is we have a good relationship with Ngati Kahungunu and had we been advised by Hastings District Council that they did not support the project, we would never have proceeded.”

Wilding said he understood that there would be objections to not removing the track for the moment, but that he was unwilling to “take a direction that left the land or the community in a worse position”.

While the consultation for the new track is likely to take stakeholders and local interested parties well into the latter half of the year, the Environmental Defence Society, a non-profit organisation, has lodged proceedings against Hastings District Council in the High Court in Napier. The proceedings, filed in July, call for a judicial review of the initial consent process by the council, and ask for a court order to remove the track. It is not clear what impact this will have on the new joint project.

Despite admitting that “we have been terribly disappointed in the whole affair”, Wilding was upbeat about the new venture.

“The community now have an option for an enhanced track that also encompasses the ridgeline of Te Mata, with the flexibility to traverse away from culturally sensitive areas,” he said. “Ngati Kahungunu are also keen to explore the mass re-planting of native shrubs around the track and on the surrounding land, which could enhance the landscape and improve biodiversity. We are extremely pleased with this outcome, as we feel that through this process, and our partnership with Ngati Kahunungu, the whole community is now getting a fantastic outcome.”

When asked about the possible impact the controversy has had on the Craggy brand, Wilding said that “while people could argue whether it has been good or bad…the truth is the intention was to gift a track to the community.”