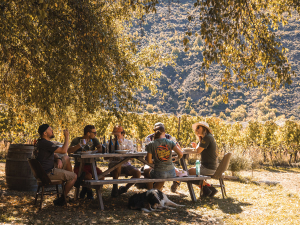 A vintage crew at Gibbston Valley

Sharing the splendour of Central Otago has been key to an attraction campaign for the 2022 grape harvest.

"We have focused on ways to attract kiwis to work in our region, which we have never done before," says Central Otago Winegrowers Acting Chairman Andy Wilkinson on the push to get enough labour. "We had to get a bit more resourceful."

New initiatives include a video showcasing Central Otago as a wonderful place to live and work, made with support from Tourism Central Otago (TCO). The footage shows a harvest amid spectacular scenery, rich with worker camaraderie. "Working in Central Otago vineyards is an amazing experience," says Andy, who also had a story published in the New Zealand Motor Caravan Association magazine, inviting those on the road to head to the picturesque south. "We flushed out a whole range of people," says Andy, who finds it very easy to sell the dream of a life in Central and time amid the vines.

"As well as the opportunity to be part of the teams crafting some of the world's finest wines, you can enjoy the spectacular scenery, walking trails, cycleways, lakes and rivers on those long summer days off. Our crews from across New Zealand and abroad, form long-term friendships that carry the great memories from time spent in Central Otago."

Andy says Central Otago has a gread reputation for being collaborative, and the labour campaigns have called on that support network, with TCO, fruit growers and viticulture working together on a common goal.

Gibbston Valley Wines Winemaker Christopher Keys says that collaboration isn't only working to draw people to Central Otago for harvest, but also to tempt those already working in orchards in the region to stay on for the grape harvest. "To let them know once cherries are done there's going to be work in vineyards."

"There's much more of an integrated system at play," he says, referencing cross industry discussions, as well as liaison with the Ministry for Primary Industries and Ministry for Social Development. Christopher says university students have been "incredible" for spring and summer vineyard work, but as they go back to school, "that will create a bit of a gap".

With high handpick requirements, the vineyard labour requirement is ten times that of the wineries, "so we want to encourage anyone to come here for horticultural work or from other regions where the picking is more mechanised", he says.

Like Andy, he's sold on selling such a "glorious" region at a beautiful time of year, for the memory-making experience of vintage. "There's a camaraderie out here and a real sense of achievement as you get through the season, vineyard by vineyard, vine by vine, branch by branch, then nurture it through to the wine stage. That's pretty cool."