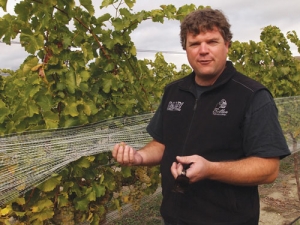 “The slow creeping menace of phylloxera can be viewed as a positive; as an opportunity to replace with better clones, different varieties and also to experiment” says Matt Dicey, shown here with ripening Chenin.

Phylloxera. The very word strikes fear into the heart of grape growers and winemakers everywhere from Bordeaux to Central Otago, where emaciated vines, yellowing leaves and declining productivity are of growing concern to those with phylloxera.

The burning question is: how and where did phylloxera raise its menacing head in Otago?

Viticulturalist James Dicey found phylloxera about 18 months ago in Bannockburn on the Manson’s Farm Vineyard. He guesstimates it had been there for five to six years when first discovered.

“We all knew it was an inevitability because of ungrafted vines in the area, so there has been a protocol that’s been in place since the early 2000s. It’s a voluntary protocol but, if followed, it works.”

This includes controlling the movement of people and machinery across property. The protocol is to steam clean machines with chlorine and maintain personal discipline about which boots are worn between vineyards that have been identified as having phylloxera and those that haven’t yet been confirmed with it.

The key to phylloxera is management. This way it’s spread can be delayed and vine replacement can take place in a considered fashion. It also enables winemakers to replace improved clonal mixes, better varieties and on more favourable vineyard sites.

“The first stage of the phylloxera process is mass hysteria and panic and the second is research, knowledge and understanding and that brings an ability to recognise that it can be managed well during the transition to grafted vines,” says Dicey.

The third stage is to encourage winemakers throughout the affected region to employ group strategies.

Winemaker Dean Shaw of the Central Otago Wine Company (COWCO) echoes Dicey’s philosophy about slowing down the arrival of phylloxera in ungrafted vineyards as a key component of managing its disappearance from the region.

“Keeping phylloxera at bay by slowing down the rate of spread can be achieved by keeping tractors out and feet out of the vineyard. This can enable new grafted vines to gain some vine age before losing diseased vines.”

The discovery of phylloxera can provide a positive opportunity too, says Shaw.

“When phylloxera is discovered, it forces winemakers to look at their vineyard sites and this is something that young regions such as ours need to do. We can use its discovery to find better sites for some varieties and clonal mixes and also to declassify wines made from young grafted vines during the transition.”

In order to retain some ‘old vine’ wines for both economic viability and quality production, the replacement programme needs to take place gradually.

The most deleterious effect of discovering phylloxera on old vineyards is vine age; “you can’t buy that.”

Dicey says this means that the effective and gradual management of phylloxera is even more necessary. From a personal point of view, he and the Dicey family will be managing Mt Difficulty’s three single vineyards, which are all planted on their own roots; Pipeclay, Target Gully and Long Gully were planted in Bannockburn in the early 1990s. They are now gradually being replaced, often with alternative varieties that are grafted, such as Chenin Blanc.

“One of the things that we are doing on the Long Gully vineyard is going through and tagging those vines that are displaying homogenous characteristics. This will enable us to identify how each clone corresponds to berry size, bunch sizes, cluster openness, early and late ripening times. It will help us going forward as we are actively going to harvest the scion wood and contract a nursery to graft the desirable material for us so that we can replant.”

James Dicey is also planning to replant his own Ceres Vineyard situated on an inlet of Lake Dunstan on the way to Carrick winery.

There are both challenges and benefits in replanting new vines when phylloxera has been discovered in a region.

“Phylloxera can mildly devigorate grafted rootstocks, so planting young grafted vines on phylloxera blocks is not a good idea because the land needs to be left fallow to remove the influence,” Dicey says.

“That’s exactly what we’ve done at Manson’s Farm by pulling out the Pinot Gris that had phylloxera there. It wasn’t a very sexy clone anyway and never made exciting or good wine. We need some more Chardonnay so we’ve ordered some 548 clone Chardonnay from Riversun and we’re looking at this as an opportunity to change the vines to something far more favourable.”

Where does phylloxera strike?

The movement of machinery needs to be carefully monitored between vineyards that have been identified as having phylloxera and ungrafted areas which may have it; particularly machine harvesters and tractors. Phylloxera can also be transmitted on the feet of rabbits and dogs and can be windblown, but the latter has not yet been discovered in New Zealand, says Dicey.

Why were ungrafted vines planted in the first place?

Dicey says that many nurseries that supplied vines were relatively small and unable to easily access grafted material at the time.

“The other reason was that we had no confidence and certainty about the varieties and clones that we were planting. So we sourced scion wood of Vitis Vinifera and planted our vines in virgin soils that had never seen grapevines before, so we were aware of its potential risk,” he says.

“We were putting protocols in place back then as we recognized the risk.”

Management protocols of phylloxera can be crucial to the economic viability of a wine region, and can take place by managing the slow creeping menace without panic. This involves a cultural change.

“By accepting that it is here, our view is that management is the most important thing so that we can stop it spreading further by systematic measures in the vineyard,” says Shaw.

Dicey agrees, recalling one of the questions that Aubert de Villaine from Domaine de la Romanee-Conti asked him when visiting the region last year.

“He asked me: ‘what are you doing to create your own local clones?’. The answer is that phylloxera is providing the impetus for accelerating just that sort of discovery of new clones that have adapted to Otago’s specific environment. We have already started this programme pre-phylloxera and phylloxera has now provided the real push for us to examine our best vines more closely in our quest to plant the most appropriate clones to specific sites.

And as for its spread, Dicey and Shaw believe that Otago’s cool southern climate helps to keep its rate slow.

Dicey says: “I believe it’s our very cold climate that prevents a fast spread. We have a very low insect problem here; the cold, just like the sun, is a sterilent.”