Master’s view of our wine 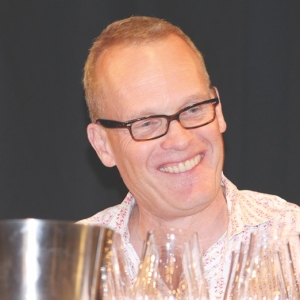 As organisers were gearing up for the 11th anniversary of the Central Otago Pinot Celebration at the end of January, one weary wine scribe was preparing to leave a UK winter behind and catch up with some old acquaintances.

Though, to describe Master of Wine Tim Atkin as weary would be a wee bit disingenuous.  In fact, it couldn’t be further from the truth. In a calendar year that can see him spending long periods of time living out of a suitcase and pressing flesh with the alumni behind some of the planet’s finest wines, Atkin’s fervour for his job has not abated one little bit.

After 28 years of waxing lyrical about wine and with far too many accolades to list here, Atkin is pretty straight-forward when it comes to explaining how he manages to keep his enthusiasm for wine intact.

“Well to be honest with you, wine is made in much nicer places than beer or vodka is made, so you get to visit beautiful places which is great. But it just combines so many things; people, taste, there’s climatology, there’s geology. I’m increasingly starting to get interested in geology and like most wine writers I think I know a little bit about it but as it turns out I know almost nothing.”

When talking about beautiful places and interesting geology, Atkin’s enthusiasm for all things Central Otago is only too evident. With an impressive knowledge of the region’s distinctive locations and able to talk about say, the difference between Lowburn, Bendigo, Bannockburn and Gibbston with ease, what he is really looking forward to, is seeking out and assessing the development of sub-regional styles.

“I’m really keen to see how terroir driven style is starting to emerge?”

For someone who spends his life travelling, tasting and writing, the opportunity to get out and about amongst the vines and talk with the folk at the coal face is the most valuable part of the job.

“Sure, big tastings in one room are great for busy people, but there is no substitute for getting out there. If the job of a journalist becomes just sitting in a room and typing scores into a computer without any contact with winemakers or the vineyards, then we’ve lost sight of what wine should be about.”

Given another UK writer has recently said he believes some Central Pinots are becoming too jammy, Atkin says there is plenty of variation within the wines produced in the region

“Well, its a fair point as they certainly can be quite dark in colour, but again it depends on the producer. If you look at some of the Two Paddocks’ styles or the Grasshopper Rock styles or the stuff that Nick Mills is making at Rippon, they tend to be lighter. There are lighter styles. But I think because of where the region is and the climate, you are predisposed to producing big styles, deeply coloured. They’re certainly big wines…and really, what is wrong with that?”

However when it comes to New Zealand Sauvignon Blanc, Atkin  has some concerns.

“I think the worry for New Zealand is the dominance of Sauvignon Blanc,” he says.  “It has become something of a cash cow and consumers don’t seem to differentiate between the cheap stuff that is often shipped in bulk and bottled in the UK and the stuff that’s worth paying a bit extra for. I think that one could contaminate the other. The bottom is pulling the top end down. The worry for New Zealand is two-fold, one that they are associated with one grape variety and the other is that the quality of Sauvignon Blancs that we are seeing in the mass market are not as good as they used to be. Is New Zealand betraying those consumers in a sense?”
But, getting consumers to divert their trolley’s away from the Sauvignon aisle is another issue entirely. It is a frame of mind which Atkin says is also experienced within New Zealand vineyards.

“I think the diversity of New Zealand wines need to be strengthened. I think Bordeaux style blends particularly based on Merlot more so than Cabernet, aromatics and the top shelf Chardonnay’s are terrific. I’m always banging on about the quality of the Syrahs and of course Pinot, it’s just getting better and better. But, with that caveat, I think you need to be aware that just because you make a Pinot Noir from New Zealand you (may not be able to) instantly sell it. It’s very difficult to just emerge in the market place and sell a wine for 25 quid. A lot of people have come unstuck doing that. I can see why they do it, yields are low and it’s an expensive place to produce grapes and then to ship it off around the world”

So, what exactly can or should New Zealand winemakers be doing to try and keep the brand fresh and in line with the clean, green and innovative culture that we would like the rest of the world to perceive us as having?

“I’d like to see a bit more experimentation,” he says.  “You know people are starting to try Albariño and Grüner Veltliner and other bits and pieces. I wouldn’t mind somebody having a bit of a go with  a few more of those sort of maritime varieties that work well in cool climates.

“Then there is the real lack of blends. New Zealand tends to be a bit varietal as it’s an easy message to convey. That’s where South Africa has got a bit of an edge on New Zealand with it’s white wines, it’s in the blends. You need a few more boundary pushers in New Zealand, a couple of mavericks.