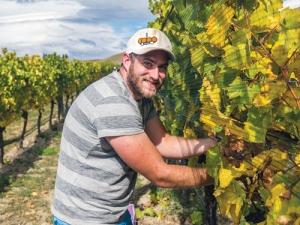 Full-time viticulture teams welcome strangers and friends alike, to join them over a period of days or weeks to pick grapes, chat, laugh, eat and drink. It is after-all what the previous year’s toil amongst the vines is all about.

At Felton Road, they like to talk about harvest as a family experience. From owner Nigel Greening’s family who are often present throughout harvest, to the family members of the Felton Road team, though to the colloquial family as they refer to all the familiar faces who return with remarkable regularity.

Entering their 19th harvest the annual pilgrimage to Bannockburn normally includes visitors from all over the world, wine aficionados and backpackers alike, and also the one and only Alastair McLaren (known as Mr Mac) who is returning this year for his 14th harvest.

“As soon as you get here you meet everyone who was here the year before, you meet people that have been here for seven to eight, even 10 years and they are family that you come back to see.”

After spending his working life as a dairy farmer on the Taieri Plains, McLaren needed a hobby once he finished farming in 1998 and wine filled that void.

“At that stage there were only about eight wineries in Central that I was familiar with and Felton Road stood out as being one of the top labels. I called up Gareth King the vineyard manager and it was only his first year, he had me picking grapes for the first time in 2001.”

Since those formative days, the industry in Central Otago has certainly grown, with far more than the eight labels that McLaren was originally aware of. Spending two to three weeks every year since has probably given him a slightly unique perspective on the evolution of the region’s wine industry.

“When I first started, the vines were quite young and so were the children, and both of them have grown every year that I have come back. I have watched Nigel and Gareth’s kids grow from small children to being able to help in the vineyard. One year we had Nigel and his family all in the vineyard picking, they were just like one of the crew and I don’t think that happens everywhere. That is a culture they have created.

“Gareth also seems to be able to bring in industry people from Europe. A lot of viticulturists and winemakers want to send their kids here, and they are really valuable as we get an insight into what is happening there and they are keen to see what we are up to.”

As well as regular Kiwi visitors like McLaren, this year alone the Felton Road rows were being tended by Europeans, Indians, Australians, a Singaporean and a lone American, 30-year-old sommelier and wine writer Andrew Merrit. A native of the Northern Virginia wine region, Merrit has spent most of his formative years working in hospitality in California while developing his knowledge and palate for fine beverages.

He is impressed by Felton Road’s wines and biodynamic philosophy; “many of the best wines being produced today reflect these principles.”

Merrit decided that after travelling for three months around New Zealand working on his wine knowledge, writing a blog and taking photos, he would weigh anchor and pick some fruit.

“As a sommelier, having the opportunity to taste the different effects of soil, hill placement, clone type, and a myriad of other factors on the flavour, sugar, acid, texture and tannin of the actual fruit was enlightening.  The extra bonus of being able to ask Gareth endless questions about their process has increased my knowledge immensely. Plus the view is not too bad either.”

While the daily grind of bending down for impossibly low grapes, cutting fingers and ducking under nets can detract from the romantic notion of harvest, the picking crew at Felton Road do have a few milestones each day to look forward to.

“Everyone looks forward to the morning and afternoon “smoko” where we are rewarded with treats from Gareth’s wife Karen and plenty of hot drinks,” says Merrit. “But the best days are when lunch is provided. Prepared by Nigel, it never fails to impress and satisfy.”

Just Merrit’s mention of smoko is enough for Alistair McLaren to break out with a big smile. Not only does he roast a special blend of coffee for Felton Road that is put out for the pickers at morning tea, he also held a rather unusual record for quite some time.

“We all have our favourite morning tea treats, and for a while there was a contest for eating saveloys in bread that I held after eating 12. But Nick Paulin took that off me with 16.”

On a more serious note, getting up close and personal with the grapes each year also gives McLaren a slight head start when playing wine options with friends.

“It’s much easier when you are drinking them blind and trying to pick the vintage knowing what it was like when you picked it. For instance I know that when I am drinking the 2005, it was a very small vintage with very small berries, quite concentrated.

“I also know that they have changed their picking times a bit over the years, we tend to pick a bit earlier than we used to and I think because of that, the wine has got more finesse than it had in the earlier years, and the vines have got older.”

What of the future, how long does McLaren think he can continue to turn up at the same place each year for three weeks?

“Well, I actually don’t get a chance to miss harvest so that means I have to plan my whole year around coming here. I’ve gone from picking, to being on the bike and now on the sorting table. I’m not sure what happens after this…but I will be coming back here until I physically can’t do it I guess. I can still see myself here at 70, but it’s a real shame I am not going to be here in 30 years time, as the vines will be 40-50 years old then and will be fabulous.”