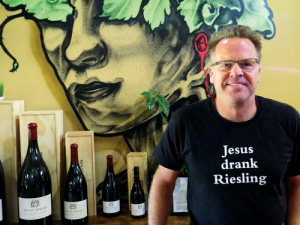 Getting involved in the burgeoning Central Otago wine industry and putting his hand up to contribute seemed the most natural thing in the world, says Duncan Forsyth.

At its Feraud Dinner in September the Central Otago Winegrowers Association honoured Forsyth with its Outstanding Services Award, for “special contribution over many years …. for the greater good of the wider industry”.

The annual dinner pays homage to one of the earliest wine pioneers of the region, Jean Feraud, who planted the first commercial vines near Clyde in 1865.

It was more than a century later that a new wave of winegrowers emerged in Central Otago and Forsyth was lucky enough to land a job at Chard Farm in the Gibbston Valley in 1992.

“When I started working at Chard Farm there were only five wineries, and everybody was part of the (winegrowers) association. The only thing I knew was a totally inclusive industry,” he says. “Right from the get-go, we were all in this together.”

After completing a post-grad diploma in oenology and viticulture at Lincoln, Forsyth worked his way up from assistant to winemaker at Chard Farm, before working at Peregrine for two years.

From 1999 when the winegrowers’ marketing body - Central Otago Pinot Noir Limited (COPNL) - was formed, Forsyth as one of the directors became heavily involved in organising Pinot Noir Celebrations, and other events - marketing and branding that was driving Central Otago’s reputation world-wide.

“We didn’t realise we were punching above our weight or busting a few perceptions. We didn’t think we were doing anything outside the box.  It just happened that being new players from a new region our wines were bound to be different. We were a breath of fresh air, and so were our wines.”

In 2004 Forsyth and business partner John Buchanan purchased Mount Edward Wines from Alan Brady.  His avante-garde approach and adoption of organics began a gentle process of evolution of the brand.

“The craft beer revolution in New Zealand 10 years ago suddenly showed the wine industry the emerging wine demographic had different expectations, and we now see a whole range of wines and styles emerging across the country that are individuals.”

While dedicating 80 percent of their production to Pinot Noir, Forsyth likes to “experiment” and has introduced non-sulphured wines, an orange wine and New Zealand’s first Vermouth to the classic line-up of varietals.

Forsyth was on the committee running the last two Pinot Noir NZ events held in Wellington (in 2013 and 2017).  He believes the wine industry needs to further develop its connections to the land - going beyond the European view of terroir – and with his influence the entire first morning of the last event was dedicated to this.

“If we want to leave any sort of legacy, it’s that in 300 years’ time people will still be talking about it. It will become part of the social fabric. That starts with understanding of our place, and respect to tangata whenua.”