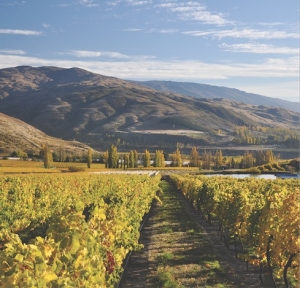 If Central Otago’s insanely beautiful landscape is not enough of a lure for wine media to the region, the annual Central Otago Pinot Noir Limited (COPNL) spring tasting most definitely is.

For eight years now, COPNL’s member wineries have pooled their resources and time to showcase their newest wines to national and international media.

The first tasting was held in spring 2006 and headlined as a Sneak Peak Pinot Noir Tasting. The name was subsequently changed because not all wines technically met the ‘sneak peak’ category. Many were already bottled and in the market.

Despite the name change, the organisers have retained their aim to showcase as many new Pinots as possible. No whites are included. The tasting reflects the fact that Pinot Noir accounts for approximately 80% of the grapes in the ground in Central.

“The rationale is to put in wines that have yet to be, have just been or are about to be released,” says COPNL event manager, Vikki Kircher.

“It has become an annual fix on our calendar because the feedback we get from the media is that they want to see these wines in the setting with the identities concealed; it provides a strong look at wine styles,” Kircher says.

In 2011 the tasting was held in Auckland, but that was a one-off because Central Otago’s winemakers prefer to host media in the region.

“We know that hosting in the region works better because it gives people a great sense of where the wines come from rather than a rented room in Auckland somewhere. It is more expensive but it’s worth it.”

Hosting in the region also means the winemakers have easy access to the media for discussions, post-tasting.

“There is a genuine feeling of helping your neighbour in Central. We don’t all hang out together; some people do, but if you need help, then your neighbour is there for you. It’s not a fake thing. We actually do get along and we do cooperate intentionally to promote our wines and the region.”

The next big event for the Central Otago winemakers is the Pinot celebration that is coming up in January.

This annual event attracts wine media from throughout the world, providing them with the chance to talk to more than 40 local winemakers, visit the many vineyards in the region, and enjoy food and wine matching events.

The 11th Central Otago Pinot Celebration is being held in Queenstown from January 29 – 31st.

What’s a perfume lover to do about wine?

It's okay to embrace wearing fragrances when tasting wine, despite what others say. Lee Suckling explains.