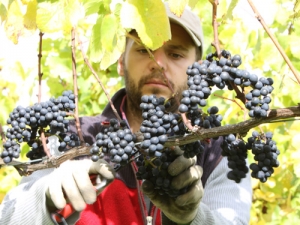 At the Neudorf Vineyard.

Let's take a closer look at Nelson with Neudorf Wines.

It is not an exaggeration to say that Pinot Noir is one grape that really expresses its sense of place. Among all the great varieties in the world, it is one that delivers a palate that speaks of its growing site. The soils, the climate, the aspect and the viticultural practices.

That is very much the case for Neudorf Wines in Nelson, who have some of the oldest Pinot Noir vines in the country. Planted by Judy and Tim Finn back in 1978, on clay soils, on a north facing slope, these vines have ever been irrigated and are farmed organically. There is something else unique about this Moutere site of Neudorf's. As far as Judy knows, the site was never forested, which means the four metre roots of the vines could well be the first to delve so deep, into virgin soils. That in itself provides something special to the ensuing wines.

Neudorf has two Pinot Noir labels – Moutere and Tom's Block. Both will represent Nelson at next year's Pinot Noir 2017, being held in Wellington from January 31 to February 2.

But back to these old vines – how much does the age impact on the wines? Winemaker Todd Stevens says he cannot provide a scientific answer to that question, but observationally there are some major benefits.

"We see them cropping lower and generally they have a smaller bunch architecture. I haven't measured this, but we do tend to see it visually. They also tend to behave themselves in more difficult years and they tend to be a bit more robust. They are not totally impervious to disease, but they tend to outlast the younger guys whose roots are higher up."

He goes further, likening the age of vines to human growth patterns.

"We talk about the vines going through their baby years and being all warm and cuddly. You can get your first crop off a block and sometimes it can be quite charming. Then they become toddlers and they can be all over the show. They tend to dip a little bit as they find their way. They go through all the ups and downs of growing up and sometimes they can shut off a little bit. Then you start to think you are making headway and they turn into adolescents and you don't understand them as much. It's not until they come out the other side and get a bit of age that you see more consistency in their behavior."

His analogy is a delightful one that many growers of Pinot Noir will readily agree with.

In terms of Nelson as a Pinot producer, Stevens says there are many strengths.

"We don't get overly ripe. I don't think we can ever become, for want of a better word, a fruit bomb or a show stopper. We just don't get that raw material. The upside of that though, is we get wines that are ripe enough and concentrated enough that they have transparency, so you can actually see into the wine. If you get too laden in fruit, you get an attractive wine but you don't get the essence of what Pinot Noir is. It just happens to be a nice drinkable red wine made from Pinot Noir."

In terms of the spectrum for Pinot Noir, Stevens says at one end you have the fruity style, the other is the savoury style.

"I think we should approach it from that point of view, rather than placing regions next to parts of the spectrum. In terms of our wines, I would say we are probably heading more towards the savoury structured end, 60 – 70 percent towards that end, rather than the fruit opulent end."

Again that comes back to the site – those clay with gravel soils that has allowed the Finns to grow the vines unirrigated. Judy says they had been searching for a site for sometime back in the mid 70's and were adamant they had to have clay. They had almost given up hope when the Moutere site came onto the market.

"We were planning to head around the world on a yacht with some friends. But then this site came up and we had to decide if we were going to be grown ups and buy it, or be children and travel the world. We chose to be adults."
Pinot Noir was one of the first varieties planted – a decision influenced by hers and Tim's love of the wine.

"You tend to look at grapes that you like the wine of and personally I think you grow the finest wines from wines you actually like. Tim and I love Pinot Noir and Chardonnay and they have become our hallmarks."

Once again Neudorf will be part of next year's Pinot Noir Celebrations, having been involved since its inception in 2000. For Judy it is a no brainer, given the exposure wineries have to influencers from throughout the world.

"We don't go to a lot of events because the expenditure is way out of whack with our production. But I think Pinot Noir is top of the list. It amazes me that we don't have more wineries stumping up for it. A lot of wine writers come to New Zealand and they do Hawke's Bay, Marlborough and Central Otago. So everybody from Nelson, Wairarapa, Auckland, Waipara and Gisborne should be flooding to Pinot. You are going to be exposed to those people who wouldn't be stopping in your region. Over those three days you can meet everyone at least once and that is a fantastic opportunity for winemakers."