10 years of the Burgundy Exchange 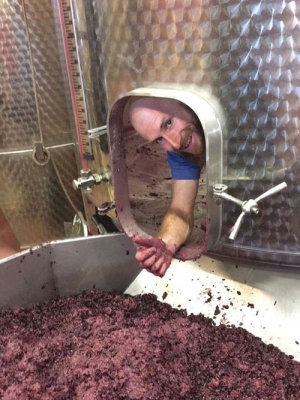 Intern Ben Holt, digging out the tanks in Burgundy.

When Pinot Noir was first planted in Central Otago, there’s a very good chance that no-one was giving much thought about garnering the attention of Burgundy.

Just getting the vines to take and making palatable wines was a good start; but as anyone familiar with the trajectory of the region goes, Pinot Noir loves Central Otago and yes, Burgundy has taken notice.

Eschewing the complete No.8 wire ethos of having a go and ‘to hell with tradition’, winemakers in the region not only recognise the importance of fostering links with Burgundy, but actively seek ways to share knowledge and experience. Nowhere is this relationship more pronounced, than the formal vintner exchange program that celebrated a decade of collaboration in 2017.

Born from a conversation in 2006 between Rippon’s Nick Mills and Sophie Confuron of Domaine Jean-Jacques Confuron, the initial idea was to send a select group of budding wine industry interns from either side of the world to experience harvest, and hopefully sow the seed for an enduring exchange of ideas, culture and experience.

“From the beginning, it was clear that the two regions had much to offer each other,” says Mills.

The enormous history and respect for tradition is something that a person from a very young country like New Zealand cannot fully appreciate until being fully immersed amongst it. Conversely, Burgundians come to Central Otago and find a place that does not have the detailed geographical and political overlays, so is free of the sort of constraints they have grown used to. “It’s an opportunity for meaningful conversation between friends, the sharing of values and ideas, and the celebration of our collective heritage.”

In the 10 years that the exchange has been operating, 75 stagiaires (interns) have been sent and received between the regions, and over 100 domaines/estates have been involved in the activities.

As Mills who is co-founder of the exchange sums up; “If we assume that each participant has come into contact with at least five people, then it’s entirely possible that several hundred people have been affected by the exchange on both sides. This amounts to a significant cultural impact, not to mention the benefits gained from the practical experiences.”

Structurally, the running of the exchange is shared between a winegrower association and an agricultural college from each region. Between the Mosaïque Bourgogne International (MBI) and the CFPPA de Beaune on the French side, and the Central Otago Winegrowers’ Association (COWA) and the Otago Polytechnic Cromwell Campus in New Zealand, there are a great number of people working really hard behind the scenes to elevate the experience for those lucky enough to be chosen.

Central Otago is also lucky enough to have the commitment from French import, Lucie Lawrence (Aurum wines). After honing her wine-making skills in Burgundy before moving here 14 years ago, Lucie likens her role as a link between the two cultures.

“For me, the key of this program is the cultural exchange. The two regions are so different, sure we have Pinot Noir in common but almost everything else is different.  It’s not so much the technical side of things as we all make wine in a similar way. Really, for people from the New World it is about appreciating Pinot as part of society and community which is really important.”

While it was extremely important to mark a decade of collaboration and discuss some of the remarkable initiatives that this partnership has given rise to; such as a moment of diplomatic intervention when the New Zealand Government provided support for Burgundy’s candidacy to achieve UNESCO World Heritage status, and conversely when friends from Burgundy sent rare wines to New Zealand to raise money for the Christchurch earthquake appeal, three stagiaires from Central Otago were already well into their Burgundian education.

Last August, Ben Holt from Carrick Wines, Alex Easton from Grape Vision and Leslie Johnston from Rippon, departed for Burgundy after successfully passing the interview process to be part of the program. Lucie Lawrence who is part of the selection committee stresses that experienced wine makers are not necessarily guaranteed an automatic ticket to Burgundy.

“Firstly, we’re looking for people who are committed to Central Otago as we want this experience to benefit the region for years to come. They have to be prepared to fully immerse themselves and to take ownership of their time. More important than technically knowing how to make wine, is a good work ethic and not being shy to pick up a broom and brush some grapes away.”

On arrival in Burgundy, the trio spent their first week at The Centre de Formation Professionnelle et de Promotion Agricole (CFPPA) in Beaune, a technical college where they were introduced to Burgundy through lectures and tastings before being placed at different host vineyards for three weeks. Leslie and Ben were dispatched to Nuits-Saint-Georges while Alex went to Chablis.

Back home and full-on preparing for an early Central Otago harvest, all three totally rated their time in Burgundy. For Ben who primarily works in viticulture, the hands-on nature of being a vigneron in Burgundy was special.

“I wanted to learn as much as I could in the winery, as that is where my expertise is lacking, but at the same time ask questions about what they do in the vineyard. I needed to see for myself what hundreds of years of tradition looks like. If I wasn’t working in the winery I would ask if I could go and pick grapes to see the different sites and locations. I definitely look at things with more foresight now, a lot more monitoring and making sure you don’t get caught out.”

Not every moment of their time in Burgundy was stringently managed either, which worked perfectly for Leslie who fortunately had a car to use.

“I drove through every appellation, wandered through the forests where our barrels are grown, spoke with so many people and saw so many things of which I previously had only a theoretical understanding.  Visual and tangible effects are often, to me, the best way to understand a thing. The whole experience has given me a lot more information to share with visitors to our cellar door which is great.”

Though, as fascinating as many hundreds of years of French wine making culture are, Leslie did discover that some traditions can be a little difficult to get used to at first.

“One of the most surprising things for me as a woman, was being told that there were certain things that I could and couldn’t do which was frustrating. But, I just took a step back and realised that they weren’t doing it to be mean or chauvinistic. If anything they were trying to be nice to me.”

As I race to meet the publishing deadline for this article, the next group of enthusiastic stagiaires from Burgundy have touched down in Queenstown and been whisked off to Maude, Mt Difficulty, Rippon and Valli where they are being hosted. It’s pretty evident to see what our interns might gain from an insight into the life in the historic home of Pinot Noir, but what do the French make of Central Otago?

“Well, for them it is all about freedom and open-mindedness,” says Lawrence. “We’re not shackled by the appellation system and heavy bureaucracy which can be a downside of 100s of years of wine making. When they go home, they can ask the question ‘are we doing this because that is what has always done, or is it relevant’? The benefit of the exchange is that the best part of both world’s can be applied to where we are right now.”