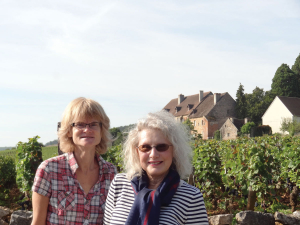 Wendy Parr, right, with Dominique Valentin on a tasting trip down the Cote d'Or.

The recently retired wine scientist lives at this piece of paradise with her husband, ecologist Philip Simpson, who she says has been a huge support and sounding board for her research. "We work incredibly well together and support one another as much as we possibly can. I think that's the key for both of us being able to contribute to research in such different fields."

Over the past 20 years, Wendy developed a reputation as an outstanding researcher in her specialty area of sensory science and became a key member of a large Sauvignon Blanc multi-disciplinary and multi-institutional project, established to identify the sensory and chemical components that make New Zealand Sauvignon Blanc unique.

Her international wine research journey started when Wendy, who has an initial PhD in psychology, was working in the areas of memory and judgement, becoming increasingly interested in wine and wine tasting. She was intrigued by "what kind of memories do these people have to be able to taste a wine and say 'chateau such and such from 1964' or something similar", and started thinking about the tasting process from a scientific point of view. She wanted to know what mental processes were being triggered, what was going on in the mind of the taster.

With Philip, a highly respected botanist with a number of books published (he is considered the authority on tī kōuka, our native cabbage tree), she established a special one-hectare vineyard on these Golden Bay limestone hills in 1999, in a small project to make Chablis-like Chardonnay.

At about the time Philip was publishing his first book through Canterbury University Press, Wendy was tiring of being an academic in Wellington, so decided to go to Lincoln University to learn how to be a winemaker and "do a little thesis on what this wine memory is all about".

After the first year of study, the university offered her a scholarship to continue to PhD level in wine science, giving her the opportunity to study, in depth, how people could remember smells and tastes and what mental processes were taking place when they tasted wines.

When I first visited them about 18 years ago, Philip walked me around the vineyard, pointing out the micro-conditions being developed, from a small creek teeming with healthy organic life to the trials they are doing with clones and rootstocks on the tiny block.

On a single hectare they had four varieties composed of many clones, using the site to put Philip's ecology skills into practice and further develop Wendy's sensory skills. "Having our own tiny research block helped us understand the impact the environment has on the flavours and structures of wine," she says.

Wendy has been part of several important international research teams, and a key question for her has always been 'how do people interpret flavour or structural components of wine?' "This extends to the impact this has on a range of criteria and what we have to do differently as a wine producing nation to alter the subtle characters of a wine, without compromising our base flavour components that express a wine's personality or identity," she says. "This is a topical area currently for producers who make Sauvignon Blanc, with a focus on characters that could be easier to sell in emerging markets. "Having our own tiny vineyard let me explore some of these things in a real-world environment at home rather than just as an academic."

After communicating with other international sensory scientists, psychologists and wine scientists, in 2001 Wendy received New Zealand Royal Society and INRA (French Research Institute) awards allowing her to travel to Burgundy, where she and others found they had many ideas in common. They have been collaborating ever since, with Wendy travelling to France each year to spend time at Universities of Burgundy and Paris VIII.

As a member of the government-funded Sauvignon Blanc research team, and later the national Pinot Noir research project, she has had the support of dozens of wineries in New Zealand, especially Marlborough, who have sent wines to France, Brazil, Chile, the United Kingdm, and Austria for her to use in her overseas research, teaching, and workshops. "This generous industry support continued throughout my other national and international research projects, including those investigating abstract aspects of wine such as perceived minerality, complexity, and quality."

While some of her science colleagues in France have spent time in New Zealand too, she has also participated in research projects in many parts of the world. "I was invited to talk in many countries including Austria, Chile, Brazil, Canada, China, Australia, and the UK."

Wendy says highlights of her international career include "an invited professorship at University Paris VIII, an invited tasting, organised by University of Burgundy colleagues, at Domaine de la Romanée-Romanée-Conti in 2014, being invited in 2011 to join Chaire UNESCO en Culture et Traditions du Vin, based at the University of Burgundy, and having many opportunities to meet and share ideas with some of the world's most acclaimed wine critics and wine scientists. I feel very privileged to have been offered these opportunities."

As she hangs up her research coat for the final time, Wendy is quick to acknowledge the help and expertise of others. "Without the support of these wonderful wine industry professionals, especially those in Marlborough who enthusiastically attended our tastings and shared their expertise with us, I and my research colleagues wouldn't have been able to make the contribution to wine research that we have, and we certainly wouldn't have had so much fun whilst doing it."

Professor David Heatherbell, now retired from Lincoln University, and Andy Frost, formerly of Pernod Ricard were "great mentors", with Andy also linking Wendy to Pernod Ricard's Research Centre in Paris. She also thanks New Zealand Winegrowers Chief Executive Philip Gregan, and the industry body, "for helping fund my invited talk at the Institute of Masters in Wine in London in 2016, and for funding my initial research projects". Then there are the wine writers and critics, including Jane Skilton, Emma Jenkins and Joelle Thompson in New Zealand, Phil Reedman in Adelaide, and Julia Harding and Sally Easton in the UK, Wendy adds. "And research and education colleagues at Lincoln University, Marlborough Research Centre, NMIT, and Plant & Food Research in Marlborough, especially my wonderful collaborator Claire Grose."

Dr Wendy Parr - double-doctorate - is a thoughtful person who has made a difference to the wine industry in New Zealand and has contributed to significant international wine research, all from her little piece of paradise in Golden Bay. Her quiet wisdom will be missed by her research colleagues and winemakers alike, "but my love of wine will always be there."