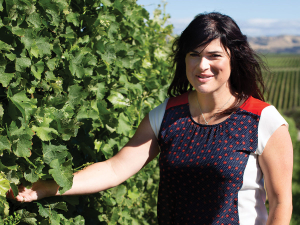 Vintage 2022 is underway as Nat Christensen calls from a warm and windy Marlborough in mid-March.

It's her preferred time of year, with harvest her favourite part of winemaking, but Yealands Wines' Chief Winemaker acknowledges there's pressure following 2021's light harvest. "Yields this year look like they will be up on last year and back to looking more like long-term averages, possibly slightly above."

The vagaries of vintage keep her on her toes, but also provide constant stimulation, says this musician making her mark on Marlborough's wine industry. "There is a little disease creeping in, but nothing worrying at this point. It's looking pretty good, and we are picking Sauvignon Blanc now in the Wairau and into the Awatere at the end of March, which is pretty normal. In recent years... we were well underway mid-March due to lighter crops and a hot dry season."

Nat began working at Yealands - one of the biggest wineries in Marlborough - in 2014, after 18 months working for Bodega La Caña in Rias Baixas, northeast Spain, and at a Malaga winery owned by the same company.

"I spent more time in Galicia, but Malaga was really different because there's always a tension there for growers, between selling grapes to make wine or selling grapes for raisin production, because the climate is so warm. The vines are mostly bush vines whereas up in Galicia it was nearly all pergola systems."

Nat instantly felt at home in the region, with a climate similar to New Zealand's. "Galicia is the traditional home of Albariño and has a very different climate to the rest of Spain, which tends to be characterised by being hot and dry," she says. "In Galicia, it is very wet in winter, so it's very green. This means botrytis potentially can be an issue, which is why the pergola system for training vines can be very good for airflow in this climate."

It was her second stint in Spain, with the first a vintage in 2013. Both taught Nat about the Spanish white grape that's such a promising newcomer in New Zealand's vineyards. "Albariño is an awesome variety and does really well here because our climate is so similar to that of its native homeland," she says.

Yealands Wines has planted some at the company's Seaview Vineyard, a coastal site offering a mineral acidity that parallels vineyards in the Salnés Valley in Galicia. "I think it could potentially be an awesome site for Albariño and it will be interesting to see," says Nat, excited to explore the variety more in Marlborough.

"I may have tasted a couple of Albariños before I went to Spain, but it wasn't a big thing here at the time. I'd heard it was a little like Riesling in terms of acidity but when I got there, aromatically it seemed to have more of a Viognier character of almond kernel and its own distinctive character."

Nat is a classically trained double bass player and originally planned to be a composer and music therapist, before changing tack to blend her music degree with a Master of Science, majoring in industrial organisational psychology. Her first job was in human resources, a role she found soul destroying, and her winemaking career was born out of what she coins her quarter life crisis. "My brother was living in Marlborough at the time and suggested I travel to see him and work a vintage. I felt an instant affinity with winemaking. I was so excited and happy to be doing something I loved and found super interesting. There were interesting people from all walks of life, all coming to join in this fascinating experience with all this fruit coming in."

Her first harvest was at Saint Clair Family Estate, before she embarked on a graduate diploma in oenology from the Eastern Institute of Technology in Hawke's Bay, studying part-time and working full-time. Pinot Noir was her first love and was key in one of her most influential life and winemaking experiences in Oregon, on a vintage away from Saint Clair in 2010. The culture of the farm to fork mentality she found there encapsulated her ethics and values. "I could relate to it because farmers' markets were starting to happen in New Zealand, so their strong presence in Oregon really resonated wtih me and it made so much sense. It felt like going back to the good way of doing things... It remains incredibly important to me," she says of the experience.

By contrast, Burgundy remained a mythical place until she visited in 2017, seeing famous vineyards in the flesh and learning how the appellations are laid out. It's an experience that she describes as lucky, due to the in-depth tastings she was able to experience at wineries such as Domaine Faiveley and Veronique Drouhin. Her trip was invaluable in terms of learning more about the Pinot Noir grape in the vineyard and in the glass.

If her first wine passion was Pinot Noir, and her newest is Albariño, the vast majority of Nat's winemaking is devoted to Sauvignon Blanc. It's a grape she loves because of its hugely expressive nature, she says, amidst the buzz of the 2022 harvest. "I'd like to continue to discover ways of making textured dry whites and different styles of Sauvignon Blanc, because great wine to me is about how wines feel, not just how they smell. It may be a bit of oak work or lees work that is used to achieve texture. It's an endlessly fascinating process."

Women in Wine: Celia Hay on making the most of lockdown

It's been 10 years since the Christchurch earthquake forced Celia Hay out of her food and wine business in the city, and 2021 was another challenging year.

Katherine Jacobs sure knows how to fit a lot into life.

Women in Wine: Claire Mulholland at home on the farm

Hard workand a deep appreciation for the land have underpinned Claire Mulholland’s career and life. Raised on a 1,000-hectare farm in Maniototo, Central Otago, Claire recognised the importance of those traits at an early age.

The 2021 Women in Wine New Zealand Mentoring Programme kicked off at the end of June with 11 wine-industry stalwarts mentoring 11 up-and-coming women working in the New Zealand wine industry.

Women in Wine: Spring Timlin on mentorship not martyrdom

The steep trajectory of Spring Timlin's winemaking career was fuelled by mentorship at Matua, where "no question is a silly question", she says.