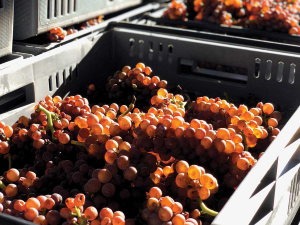 Pinot Gris is the fourth most planted grape in New Zealand, with 2,593 hectares nationwide, up from 157ha in 2001.

Back in 2001, Sauvignon was already the country’s most planted grape, but Pinot Gris was a relatively unknown varietal in Kiwi wine circles. And it remains a mystery to many, divided between those looking for dry whites and those who want a softer white wine, perhaps with a touch of residual sugar to accentuate the wine’s smooth character. Fortunately, Pinot Gris lends itself to both styles.

It varies widely in the vineyard too - most noticeably in colour, which tends to be darker than most white grapes and ranges from pink and almost as red as Pinot Noir on warmer sites. It buds and ripens early, and is relatively vigorous in growth, but is not always highly productive. It can be prone to botrytis bunch rot, downy mildew and small berries. Pinot Gris has potential for high sugar and is typically low in acidity, which can translate to a high alcohol white with richness, depending on cropping levels.

The book Wine Grapes describes Pinot Gris as a colour mutation of Pinot Noir that occurred over time in Burgundy, the Rheinland-Pfalz and Baden-Württemberg in southern Germany. This was first written about in 1711, in Baden-Württemberg, as a wild vine discovered by Johann Ruland - hence, the Germans refer to it as Ruländer. In France it was also known as Beurot and in Alsace as Tokay Pinot Gris, which the Hungarians complained about in 1984 to the European Economic Community. The French finally dropped the word Tokay from their labels in 2007, and in exchange the Hungarians dropped the word Medoc from theirs. But that’s another story.

Saint Clair Family Estate Winemaker Stewart Maclennan says the path to great Pinot Gris is as much in the making as it is the growing of the variety – if not more so - with the ability to build complexity. “That puts it firmly in the ‘endlessly fun and gratifying to create’ - when you get the chance – category,” he says.

Making something tangibly interesting and different is the driving force behind North Canterbury winemaker Guy Porter’s new white wine, which he has labeled, simply, Sous voile.