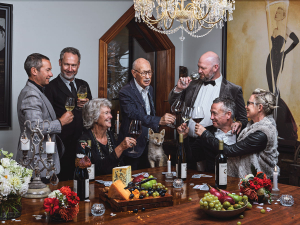 It was 1975, and for the next decade his father Ivan a neurologist and associate professor, taught himself to make wine in the garage of their Merivale home, with a young Ed often lured in to help. "It was quite painful to us," he says of chores he and his three brothers found in the makeshift winery. "We wanted to be with our mates, but had to hold a hose instead."

Back then winemaking was purely a hobby for Ivan, who was consulting full-time at the hospital, lecturing at Canterbury University, writing a medical book, and running his own private practice in the evenings. But after 10 years of weekend winemaking, he and his wife Chris decided to push Canterbury cool climate viticulture further, buying a block of land in Waipara, named Pegasus Bay for the 50km coastline stretching from there down to Banks Peninsula.

The four Donaldson boys helped take cuttings, and to plant the vineyard in 1986, with the first vintage made back in the garage in 1991. The following year Ed's eldest brother Mat, newly minted from Roseworthy's wine school, took the helm at the winery.

Thirty years on from that winery launch, all four boys are involved in the business, with each slipping into their own niche.

Ivan and Chris do less these days, with he the family's vineyard liaison, working closely with the viticulturist, and she involved in the extensive gardens at Pegasus Bay, alongside Head Horticulturist Paula Kelly. Mat remains Winemaker, Michael is Local Sales Manager, youngest son Paul is the winery's General Manager, Ed's wife Belinda manages hospitality and Paul's wife Rach looks after the sales of a Pegasus side project, Scoundrels and Rogues Craft Cider, made by Paul at the winery.

Meanwhile Ed, who recalls a childhood talent for selling everything from fudge to family members' possessions - "including my brother's rubber collection" - found a perfect fit as Marketing Manager. "That's probably been key to a reasonably harmonious relationship," he says. "We are all doing things we want to do."

There was "absolutely zero pressure" for any of them to get involved in the business, he adds. "But there was always the opportunity." And despite lamenting long garage or vineyard hours when they were younger, they all came to love being on the land, and part of the family business.

Having seven family members working side by side - six of whom have been involved in one way or another for around 45 years - means they are "very much on the same page as far as the direction of the business goes," says Edward. "We decided a long time ago we didn't want to get any bigger; we just wanted to keep making better wine."

With a 40-hectare home vineyard growing fruit for the Pegasus Bay label, another 20ha further inland growing for Main Divide, and other fruit bought for the latter label, the company crushes around 400 tonnes on average, although that varies from vintage to vintage. That's big enough that they can all make a living off it, says Ed, "but not so big that we lose our focus on quality and what we want to do in the vineyard and the winery."

There can be a lack of diplomacy when working with family, allowing for forthright conversations that keep them true to the vision, he says. "Because you know each other so well you don't hold back."

And they all have "skin in the game, so to speak", he adds. "Being owners of the business as well, we are all incentivised to do the very best we can." That can make it hard to switch off, but they are all "passionate" about the wine and land and business, he says, "and that it is something we hope will go on for generations".