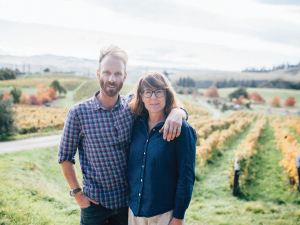 "I definitely feel that I'm growing," notes Nicholas Brown, when asked to reflect on his two-decade winemaking career, with the past 15 years at North Canterbury's Black Estate.

"I'm looking after these properties that have really great potential. I'm growing the fruit that comes off them and aiming to get the best we can, so we can reflect these places and make wine in a more natural way."

As he takes me through Black Estate's three Omihi properties, his site-driven winemaking philosophy is clear. Inspired by a love of nature, he's as much involved in the vineyards as the winery. The result has been exciting expressions of Black Estate, elevated by his sensitive and inquisitive approach. Such achievements led myself and fellow judges Jane Skilton MW and Stephen Wong MW to name him 2022 Gourmet Traveller Winemaker of the Year.

"My philosophy is to enjoy and celebrate the process and where possible connect with nature," Nicholas elaborates. "Each season is different so if we can be in sync with the season, hopefully we can help vines grow, harvest fruit with good ripeness, ferment grape juice into wine, and ultimately bottle wines that are delicious and have an appropriate natural balance.

"We're trying to make consistent wines, but they won't taste the same each vintage," he adds. "We do embrace technology, when it helps us focus on quality, for example in the winery to allow us to reduce sulphur. But it's really about what is happening in the vineyard. The rhythms of the seasons connected to the vine, and using this to show something from our sites, continues to inspire me."

Before Nicholas considered winemaking as a career, his connection to nature and the outdoors was evident in his choice of bachelor's degree subjects: botany and physical education. Holiday work as a vineyard hand at a friend's family's North Canterbury winery piqued an initial interest in wine, which led to a job in wine sales with Montana Wines. A desire to get "closer to the wine" then saw him work a busy vintage in Marlborough and discover his passion for winemaking.

Overseas vintages followed at Isole e Olena in Chianti Classico, Napa Valley's Opus One and Sandrone in Barolo. He returned from these inspired by the wine culture and dedication to quality he'd encountered, and committed to a career in wine. The next step was the postgraduate Diploma Viticulture and Oenology at Lincoln University, after which he became the Assistant Winemaker of Canterbury pioneer, Daniel Schuster.

Nicholas started to carve his own path in 2007 when, with wife Penelope Naish and her family, he bought Black Estate and its established eight-hectare Home Vineyard. He initially split his time between the estate, and working with Mike and Claudia Weersing at Pyramid Valley to learn from their meticulous terroir-driven approach. In 2013 Nicholas went full-time at Black Estate, which by 2015 had expanded to 24ha with the purchase of two further older vine Omihi properties, Damsteep and Netherwood.

A desire to work in harmony with nature saw Nicholas adopt organic and biodynamic practices from the outset at Black Estate. The estate is currently certified organic with BioGo and working to Demeter accreditation. He's also played an active role in the wider organics community as a board member of Organic Aotearoa New Zealand and Organic Winegrowers New Zealand. "I want to go even deeper with biodynamics, using the preparations to get more into the rhythm of the season," Nicholas enthuses. "I find it really exciting to bring layers of diversity into our properties to enhance them each season, improving soil, plant health and the surrounding ecosystem. I keep learning and trialling things."

As we explore the steep limestone slopes of Damsteep, the unirrigated and own rooted Netherwood hillside, and finish at the Home Vineyard, Nicholas gives me a taste of some of the things he's been exploring since we last caught up. As well as keeping up with the latest biodynamic research out of the University of Geisenheim, he's interested in regenerative agriculture, and has adopted the Sirmonit&Sirch Method of pruning for greater vine longevity.

His natural and ever evolving approach extends to his winemaking. All his wines are fermented with yeasts propagated in the vineyards. They're left to settle in seasoned or neutral oak, tank or lay tinaja, with no fining or filtration, or additions apart from minimal sulphur at bottling for half of his wines. The remainder, which include the recently launched Wildlife range, are additive-free. Removing the inputs, he says, allows him to better understand what remains, such as the vineyard yeasts.

Nicholas is modest about his personal achievements. Regularly talking about these in the plural, he obviously considers working with his wife Penelope, her family, and "having a really engaged team" an important context for his own successes. "Every year that we can produce fruit and stay in business is great. I don't take it for granted," he says. "It's a challenge in any type of farming when dealing with the elements. But it's great that people want to work here, and people want to try the wines."

Continual trial, innovation and improvement is Nicholas' modus operandi when making the wines of Black Estate. As well as making distinctive single vineyard Pinot Noir, Chardonnay, and Riesling, he's recently been behind some of the country's most accomplished pétillant naturel. He speaks animatedly of the satisfaction of making wines that resonate with others, from the single vineyard wines to his more recently developed "early drinking and fun" skin contact Treble Rosé, made from all the red and white varieties grown across the estate.

"Milestones for me are also when we've tried something different," says Nicholas. "For example, making sparkling wine, or wine with no sulphur, or planting new varieties like Chenin Blanc and Cabernet Franc." Given all these initiatives have been underpinned by the informed approach Nicholas applies to every element of his work, it's perhaps no surprise that these have all proved highly successful ventures.

"Planting this vineyard was also a great experience," he says, as we look out over the winery block that he established at the Home Vineyard site. "Working with old vines is great for a winemaker, to see that depth and richness in the fruit. But to also establish a vineyard with your team and to taste the fruit as it comes through, that's really exciting."

"We're challenged the whole time," he says. "We think we can still do a lot with Pinot Noir in refining our styles and bring out the essence even more. That keeps us busy, and the fact that there's a lot of work still to do is exciting."

Podcast: Waking up Podcast by Sam Harris, it would get me through (with internet).

Magazine: Survivalist Magazine. It would be good to nerd out and really nail "survival" while I had the time.

All the finalists of the 2022 Gourmet Traveller New Zealand Winemaker of the Year award were organic winegrowers, with the title awarded to Nicholas Brown of Black Estate in North Canterbury.