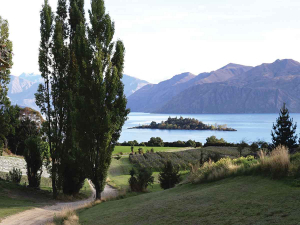 The picture-perfect setting of Rippon on the shores of Lake Wanaka looking out to Ruby Island has a fairy-tale quality.

And the story of how it came to be is almost just as mythical, thanks to one soldier’s lightbulb moment in the Second World War. But don’t be fooled by the view, their story is one of passion and a lot of hard work in one of New Zealand’s most extreme climates.

Lois and Rolfe Mills are recognised as part of the ‘first five’ pioneers of the modern Central Otago wine industry, and their dedication to the land has been passed to the next generation running the vineyard today. Earlier this year, Rippon was awarded the Best Vineyard in Australasia and ranked 8th best in the world.

Rippon’s story began in 1912 when Sir Percy Sargood bought a high-country station on the western flanks of Lake Wanaka, spanning all of what is central Wanaka today. When he died, “considerable swathes of land” had to be sold to cover death duties.

Fast forward thirty years, Percy’s grandson Rolfe was a submarine lieutenant in the Second World War. While on duty, Rolfe spent some time in the Atlantic coast of Portugal. The schist slopes of the Douro valley reminded him of home, it was his first ‘lightbulb’ moment.”

After the war, Rolfe returned to the family import/export wine business. “Even in the 1930s and 40s, wines featured regularly on the table.”

It wasn’t until 1975, thirty years after his initial idea, while running the farm as an angora goat stud that he and his wife Lois decided to plant some experimental vines. Seeing that they had taken, he, Lois and their three children moved to France for a year to try the vigneron’s life.

They returned to New Zealand and in 1982 began the commercial planting of the 15ha that today comprise Rippon.

“When they decided to plant vines, the only way in which they could raise the money to do so was to sell more land,” says Jo Mills, Rolfe and Lois’s daughter-in-law. “What we have today, along with Rolfe’s sister’s land next door, is all that remains of Wanaka Station, that massive farm.”

Because it had never been done before, the Mills moved to experimenting with vine varieties, not knowing which would be able to take in the cool climate.

“With very little in the way of plantings south of Christchurch at that time, we planted around 30 varieties recommended as cool climate options by Te Kauwhata [Viticultural centre].” Their flagships today, Pinot Noir, Riesling and Gewürztraminer featured among these recommendations.

In 1993, wine writer Michael Cooper was still asking of Central Otago, “the crunch question is whether this region is sufficiently warm to support commercial wineries.” The Mills were 10 years ahead of the wider industry discussion.

Rippon has been organic since inception, and biodynamic since 2002, after winemaker Nick Mills returned from studying in Burgundy.

“While there he did a biodynamic course with Pierre Masson and worked in a number of biodynamic domaines where he saw the clear difference in the vines and soils. For us, it helps better inform all our decisions on the farm and, by looking down more rather than up and out across the lake, connects us more tightly to the land and soils beneath us.”

Biodynamic farming, wild ferments, no irrigation and some of Central Otago’s oldest vines on their own roots all help to produce fruit and wines which are true to their place. And now their place has been recognised among the world’s best vineyards.

Nick and Jo remain humble and slightly uncomfortable with their new title, as they don’t normally enter competitions. “That said, for Central Otago to be recognised alongside some of the largest wine producing regions of the world is incredible and is a testament not just to our team and the land but to the commitment of growers down here of rendering top notch wines from top notch sites and bringing them onto the world stage.”

Rolfe and Lois Mills attitude defined how Rippon was and continues to be farmed: “with passion, hard work and a bloody fantastic team. Without those three, we would simply not be here today.”

The Wanaka township is exploding in size and whether there is a growing tension where the land could be more valuable as real estate. However, Nick and Jo remain as dedicated to their guardianship of this special piece of land. “If we lost the land, it would be gone forever. It’s been a continued family pursuit to farm the land and, for our generation, this is primarily in the form of viticulture; recognising the land’s true potential through winegrowing.”

And will the next generation take up the family business?

“Whether the next generation chooses to do so is out of our hands; all we can hope to do is instil a love of the land in them all and an appreciation of what an incredible opportunity we have as a family.”