New Vintage: Thinking outside the box 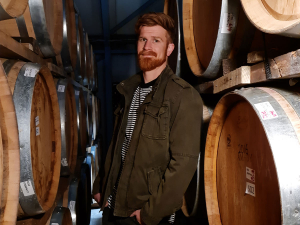 Brad Frederickson is the creator and Winemaker behidn Outside the Box Wines, an experimental brand that questions traditional winemaking.

"I've always questioned the rigid ways that wine has been made because 'this is how it's always been done'," he says. "I like experimenting to see what else is possible."

An artist, artisan upcycler and "all-round maker", Brad created the artwork on his labels as well as the wine inside the bottle. "It usually starts with a label idea, then I work out the winemaking."

Brad began working in the wine industry after studying Viticulture and Wine Science at the Eastern Institute of Technology (EIT). He knew he wanted to work in an industry related to horticulture, which was his favourite subject at school. In his third year at EIT he won the Young Vintners Scholarship, allowing him to work at Craggy Range for his first harvest. “This experience changed my mind and I decided to pursue a career in tank digouts – sorry, winemaking.”

After studying he travelled, completing two harvests a year for eight years across seven different countries. Although he loved the lifestyle, it was “tough on the bank account”, and an Assistant Winemaker role at Yealands Estate in Marlborough ended his vintage hopping. In 2020 Brad completed the New Zealand Winegrowers mentoring course, and at the same time the opportunity to create his own wine presented itself. “Luck or fate – however you want to put it – the pieces fell into place.”

He had been dreaming about the idea for Outside the Box Wines since 2014. “It’s always been a thing for me to play round with little side experiments of juice here and there to see what I could make up.” At the time, Garage Project’s experimental style of brewing was taking hold of the New Zealand beer industry and Brad was inspired by their success.

He says his first vintage went great, and he has released his first wine, Rosé 3-Way, using just 650 litres of Rosé. “That’s living the dream. It gave me plenty of time to fuss over the details.” The wine is made from Pinot Noir and Gewürztraminer grapes, in three styles blended together: a cold ferment which provides finesse and elegance; a Chardonnay-style ferment with oak contact, lees stirring and malolactic fermentation for depth and structure; and a carbonic maceration which provides a touch of bright fruity aromatics, colour and another dimension to the palate weight.

Taking small steps, this year he hopes to create another five wines. He worked with Clayvers - clay ceramic fermentation vessels - in Italy, and decided to import three for the 2021 harvest. Now he has a Sauvignon Blanc, Chardonnay and Pinot Noir in the vessels. He has kept it “reasonably standard”, he says. “As at the end of the day I need fair examples of what they can do.” He is also now the New Zealand agent for Clayver.

Brad is also working on a Riesling made in three different batches with different yeasts, then blended, and on another potential wine, which is a secret. But the winemaking is the easy part, he says, explaining the challenge for a start-up to get listed in bars and restaurants. He hasn’t found a “how to start a wine business in New Zealand” YouTube video yet, but has been surrounded with supportive people, he says. “Doing the New Zealand Wine mentoring programme was a huge help… My mentor Kat was super helpful and supportive.”

His current workplace, Lawson’s Dry Hills, and his manager there have also been very accommodating in allowing him to start his own company. But his parents have been the biggest help, supporting Brad through his travels and then in the start of his wine label, he says. “I’m quite lucky that I managed to convince them that Outside the Box Wines was a good idea.”