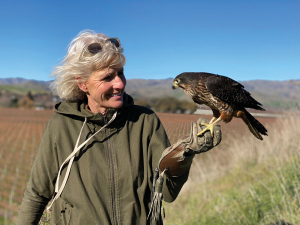 It’s a well-earned accolade for a woman who has worked closely with Marlborough vineyards, including Brancott Estate and Lake Chalice, to restore New Zealand’s native falcon to the region.

While Diana’s focus is kārearea, her dedication to bird conservation means no bird is turned away, as evidenced by her recent adoption of a colony of 34 critically endangered black billed gull chicks.

When a vet rang her after being delivered a cardboard box full of eggs, there was no dallying. “I went to pick them up and as I was driving back to Kekerengu, where we are living with our daughter, some of the eggs were hatching as I was driving. We had 34 chicks by the 8th of December, and my daughter had our third grandchild on December the 11th, so quite a lot going on with me in and out making sardine and pilchard smoothies for this lot,: she says. “Shorebirds are not birds I’m familiar with, but there was nobody else here to take them on. I had to keep the colony together; it’s the first time a whole colony has been raised.”

While the black billed gulls will take over nine months of dedication, Diana has given ten years of her life to the Marlborough Falcon Conservation Trust’s effort, which has seen 68 kārearea released in the region, making up one percent of the wild population, and many injured falcon rehabilitated.

There is no textbook for raising and rehabilitating kārearea. But for Diana, it’s a skill that comes naturally after 45 years practice. “My New Zealand grandmother and my father were strong nature people. I inherited that gift. I always knew about birds – nests, feathers, eggs, fledgings; I had an innate knowledge.”

She also had a very supportive mother who, despite being a busy sister in a hospital, would trip around English hedgerows with Diana on the back of the bike to look for nests.

Since Diana was a child, she has rehabilitated and released birds of many species in England, Ireland and South Africa. When Diana first met her husband Steve, she immediately fessed up to ‘loving birds’. “He thought I was talking about budgies or something like that. But early on he took me to Beatrix Potter park and we sat outside, and I fed the chaffinches, and they all were landing on the table, coming to me. He couldn’t believe it – had never seen anything like it, and finally the penny dropped.”

In 2003 Diana, Steve and their two teenagers came to live in New Zealand. On the plane journey, Diana turned to Steve and stated that she was giving up the bird rehab work for the wine industry. She worked at the Mud House cellar door for six years, but her desire to work with birds couldn’t be quashed, and when a role came up the Marlborough Falcon Conservation Trust in 2011, Diana landed her passion job.

She started with six birds at the trust premises on Brancott Estate, which has been a supporter of the trust from the beginning. In 2014 the trust extended the facility so that more falcons could be accommodated.

Diana is supported by Lizzie MacFarlane, who leads the trust’s education programme, three committed volunteers and a dedicated board of trustees.

She cares for 21 kārearea, which cannot be returned to the wild, in a purpose-built aviary, and is responsible for the breeding programme that has enabled the trust to release 24 chicks over the past five years. She also trained the trust’s advocacy falcon, Fern, who has gone on to wow hundreds of people with her flying displays. Lots of people phone Diana if they find an injured falcon. Often it is a hawk, but no one is turned down. “We are in the minority – the bird rehab people – when you do it for 45 years, you know it so well. I am very committed and have a deep understanding of how to help each and every bird that comes my way.”

Diana’s skills and dedication were put to the test by last year’s rehabilitation of the aptly named Sparky. “She had been electrocuted and her head was wedged between her feet; every time her head came up, it would flop back down. Her feathers were melted right across the back of her neck, with singed fathers along one wing, and she was also fitting up to 100 times a day.”

Diana tried all kinds of contraptions to help the bird hold her head up, including an adapted waste-paper basket designed by Graham, the Trust’s volunteer butcher. “She spent the first three months being hand fed, sitting on heat, fitting many, many times a day and everybody asking me when I was going to pull the pin. Her fits caused her to uncontrollably strike out with her legs, which made feeding quite a challenge. Then I noticed after 14 weeks that the fits were definitely lessening and it was then that we turned the corner.

“Her head gradually came back up and straight. Learning to walk was another milestone, and then flying again. After 10 months at home she was returned to the aviary where she continues along her road to recovery. Her will to live was incredible. She gave me as much as I gave her, but she was definitely my most challenging case to date. I do love these cases; I think I must be the equivalent of an intensive care nurse.”

Diana has been very humbled by the QSM and the messages of support she has received from all over. “It’s like I have been living underwater for years, and suddenly have been plucked to the surface. I simply hadn’t realised how many people knew about me and this work.”