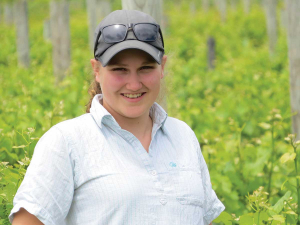 When Rylee Adams drove a gondola in the 2020 vintage, she was more interested in the cadence of the motor than the surrounding vines.

Hearing her on the RT warning of a maintenance issue was music to the vineyard manager's ears, says Accolade's National Viticulturist Tracy Taylor. "That kind of stuff is gold."

Now Rylee, 18, is an apprentice at Accolade's Woolshed Vineyard in the Wairau Valley, indulging her passion for large machinery while learning about everything from trunk disease to fluorescence counts.

She learns a lot on the job under the guidance of vineyard manager Nev Gane, who's worked his own way up in the company after helping plan the block 19 years ago. "I started off as a butcher and started here pretty much at the bottom," he says. "I learned a lot from the people I was employed by," he adds, having seen the vineyard cycle from "whoa to go", from planting to dieback counts.

Rylee's vineyard work helps her gain credits in the Primary ITO course linked to the apprenticeship, and she also has classroom time with Training Advisor James Crockett. Tracy says the apprenticeship, partly funded under the Government's new Apprenticeship Boost, is about career progression.

As Rylee gains qualifications and experience, she'll get more responsibility and better pay, says Tracy. "This industry is desperate for vineyard workers, operators and managers. there are plenty of older people but not so many of the younger ones coming through." She says a job advert for a tractor driver is not inspiring for young people wanting to build a career. "I think young people have a higher expectation, and so they should."

Training up a young person has had unexpected benefits, including a new app-based irrigation system. "Within half an hour, Rylee had the zones turned on and off and had downloaded the app," Tracy says."Us old fellas struggle to turn the computer on," agrees Nev.

Rylee grew up in Hanmer Springs and boarded at Nelson College for Girls, before Marlborough to train as an auto mechanic, having always wanted to work with heavy machinery. But she's welcomed the chance to learn about the vineyard, and Nev is enjoying passing on his knowledge. "There are a lot of people who go in one direction," he says. "I'm really looking forward to bringing Rylee through, so in the end she'll know the whole process."

Apprenticeship boost is a payment to help employers keep and take on new apprentices, administered by Work and Income as part of the Covid-19 recovery. Primary ITO Training Advisor James Crockett says in Marlborough that payment is being used by people coming into the wine industry, as well as those already employed in vines who want to gain qualifications while they work. "It gives people a really good base and introduction to the industry," says James, adding that some go on to do degree-level study, or to specialise in a certain area. "It sets them up really well for that." James says the boost is making people more aware that the training options are available. "It's putting apprenticeships in the spotlight again."