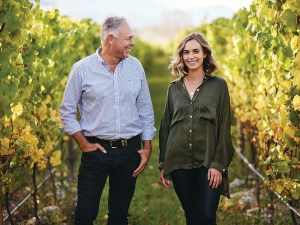 Both follow in the wine pioneering footsteps of Brent's late father John, whose 1973 visits to buy land for grapes in Marlborough are well-told. In just 10 days he found 2,900 acres of land for Montana to purchase under an alias, finally settling on 1,200 acres to be converted to vineyards. He was quickly sent back to buy more, securing a further 800-acre site for their future winery for their future winery for only $180,000.

Montana's grapes famously kicked off Marlborough's commercial wine industry. In 1978 John became one of their first contract growers with a crop of Muller Thürgau. He was their Operations Manager and Viticultural Advisor for 10 years and pioneered the region's first irrigated vineyard.

The rest, as they say, is history - the enormity of which hit Brent in the 1990s, the first time he left New Zealand shores with Sauvignon Blanc and Chardonnay from his own brand, Wither Hills. "It dawned on me that we really do have something quite unique and special - wines that people not only want to try but adore," says Brent, now Marisco Vineyards Proprietor and Chief Winemaker. During those early travels he would reflect on how the world saw Marlborough, and his family business, which made a lasting impression. "A lot of the people I met overseas are people that became friends, with businesses that I'm still dealing with today, and that was 30 years ago."

In 2006 Brent established The Ned label and in 2013 he bought Marlborough's historic Leefield Station with his wife and Marisco Vineyards co-owner Rosemary. Emma, 28, the eldest of their four daughters, who like Brent went to The University of Adelaide (formerly Roseworthy Agricultural College), joined Marisco Vineyards in 2017, whil sister Georgia, 25, has become an Assistant Brand Manager for the company.

The family legacy, says Brent, has been organic, grown from the earliest days of watching their Auckland-based daughters thrive in the Marlborough outdoors, even more so as Leefield Station was planted. Those idyllic scenes shaped their way forward: "Not only with the land and what we were creating around it with the business, but also with the girls really truly, passionately loving it all and excited about the future."

Brent and Rosemary consciously slowed all decision making, ensuring legacy was at the forefront.

Discussions at the dinner table invariably turn to wine, says Brent. "When we sit down for dinner and open a bottle of wine, rest assured we're still talking about work. And there's something quite special about that as well. Sharing the day together is quite exciting... our children see and feel the family vision."

For Emma, who recently launched and eponymous wine label, early memories are of riding harvesters, tasting ferments, digging out Pinot tanks and riding bikes through the winery. Her interest in wine came early, seeping into school projects from science to design. A passion for art and science was perfectly captured by the wine industry, which "seemed like a really perfect fit".

She has worked more closely with Brent in recent years, particularly during harvest. While they "definitely have strong personalities", their love of wine ultimately makes it fun. "There's nothing more exciting than getting out into the vineyard and tasting the fruit or being in the winery and tasting ferments every day. Tasting ferments together has become a wonderfully treasured ritual for both of us through harvest, somewhat soothing yet productive."

As borders reopen, Emma is looking forward to heading back out to the marketplace to meet some of the people to whom her dad has presented new vintage wines over the past three decades, and may even remember her biking around the winery as a child.

For Brent and Rosemary, their early decision to talk about legacy with their daughters has paid dividends as they watch them enjoy the world of wine, with pride. "It was a decision to back ourselves, to control our own destiny."