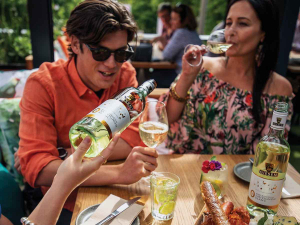 I’ve recently given up caffeine. At first, decaffeinated coffee and herbal tea didn’t really do it for me, but I’ve persevered and am beginning to enjoy both. I still miss the buzz, but not so much. I have no plans to cut out alcohol and was motivated by a sense of curiosity rather than hedonism when I agreed to taste three “blind” alcohol-free examples of Sauvignon Blanc. I have tasted alcohol-free wines in the past. None of them made me want to climb the steeple and ring the bell.

David Jordan, neighbour and rock-star viticulturist, had masked the wine with his very own socks which he assured me were freshly laundered. As he poured three anonymous glasses he explained that one was a yet-to-be-released New Zealand Sauvignon Blanc while the other two were major sellers and leading competitors in the world of zero-alcohol wine.

The first wine was notably paler than the other two. It was slightly sweet but the sweetness was nicely balanced by gentle acidity, creating an appealing tension. Fresh with subtle fruit. I liked the wine and would happily drink it. It was David’s favourite.

The second wine was more intense and richer. It tasted like Marlborough Sauvignon Blanc with pronounced passion fruit and red capsicum flavours. Slightly sweet but dryer than the first wine with pleasing sweet/sour tension. This was my favourite. I rated it narrowly ahead of the first wine and way ahead of the third wine, which I found to be bland and very slightly bitter.

The great unmasking revealed that the first wine was Eisberg Sauvignon Blanc from Germany while the second was our very own 2019 Giesen Marlborough 0.0 percent alcohol Sauvignon Blanc. Well done Giesen! I’d very happily drink it and awarded it a score of 87 points. Giesen claims that the wine has 85% less calories (presumably when compared to their regular Sauvignon Blanc).

The third wine, which we both rated worst, was Edenvale from Australia.  Neither the Eisberg or Edenvale were vintage-dated which indicates to me that they are a blend of vintages. A small step in wine perhaps, but a giant leap forward in 0.0 percent alcohol Sauvignon Blanc.

I am in the process of compiling a list of things that should never be attempted.

It's a wine seller's market, according to Bob Campbell, MW.

How important is vine age to wine quality?