Ozone in the vineyard 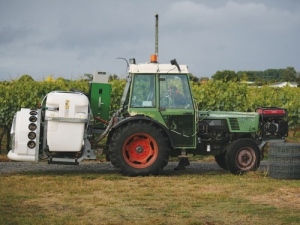 An Ag03 machine which fits onto a sprayer.

The word ozone conjures up images of big holes in the atmosphere, stronger UV light, the risk of severe sunburn and CFC's — at least in this part of the world.

However if you are a vineyard owner, then maybe you want to think again about this particular compound, as it could be a saving grace out there among the vines.

Ozone or O3, is an unstable bluish gas, that has long been recognised as a sterilising agent in wineries and dairy units.

Now it is being touted as a sustainable way of killing pests and fungus among vines, with machinery soon to be available here in New Zealand.

A quick search on Google, and this is the explanation of how ozone is formed.

However it doesn't remain as O3 for very long, quickly converting back to O2 within 10 to 20 minutes.

Until now the New Zealand wine industry has had to settle for using ozone in wineries only, because there hasn't been the equipment available to transport the unstable compound out into the field. That has now changed with developments in the US that has seen a portable ozone generator created. It takes oxygen out of the air, passes it through an electrical current, transfers it into water which can then be sprayed onto vines or fruit.

The ozone charged water sterilises everything it comes into contact with – which means any bacteria, mites or fungus sitting on the vine and/or fruit is killed within seconds.

Andy Symonds, a spokesman for the recently formed New Zealand Company AgO3 who are the sole agent for the machines, says the technology has been trialed extensively in the States with outstanding results. Because O3 converts back to O2 in a short space of time, it is not only the perfect sterilization method, it also leaves no residue.

"It is in no way harmful to the plant or humans," he says, "so it is a very sustainable method of controlling pests and fungus. We capture the O3 and put it into water, spray it onto the vines and it breaks down the outer membrane of the fungus almost instantly, and then within 20 minutes it reverts back to its natural state. So there is nothing harmful left on the vine or in the air."

Once the gas is integrated into water it is so safe that protective clothing is not necessary, although it is still recommended he says. It does however have a rather strong smell, which is best described as unpleasant and may require a bit of mouth rather than nose breathing. But the smell too dissipates within minutes.

Obviously there is the added bonus of not having to use as many chemicals within the vineyard, Symonds says, especially as the season progresses towards harvest.

"Coming from a horticultural background (apples) I know how quickly disease can threaten livelihoods. Yet there aren't that many options available other than chemicals. We think this system offers a lot of opportunities. We are pretty excited about it."

The machinery which Symonds says is quite small (less than a metre high, by 50 cm wide and 15 cm deep) can be attached to normal spray units used within the vineyard.

"It's like a slab type box that has an air conditioner, an electrical current that draws O2 in and makes the conversion and pumps out the gas. When placed onto the back of a nozzle sprayer, it circulates the O3 with the water, allowing it to be sprayed onto the vines."

Trials in the US have shown ozone generators to be effective on mites, fungus and powdery mildew. That could be the biggest advantage here in New Zealand, given the increase is severe powdery outbreaks in the past two years since the sexual stage was discovered here. As the disease becomes more resistant to traditional forms of control – O3 may be the best bet for the future.

"We are currently doing our own research on powdery in Hawke's Bay via Peracto Research," Symonds says, "with results due out in late January or early February."

A description of how ozone charged water worked within vineyards was reported in an article in the US Vineyard & Winery Management magazine, earlier this year.

"As an unstable gas, ozone readily reacts with both inorganic and organic matter. It sanitizes by charging or "lighting up" cell walls and denaturing metabolic enzymes. Once its oxidizing potential has been released, ozone reverts back to oxygen, leaving no chemical residue."