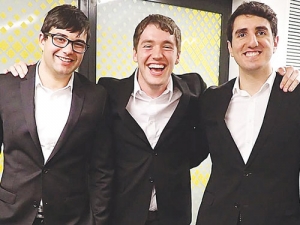 Estimating grape yields is a headache for the wine industry – but now there’s an app for that.

Seer Insights is a startup created by three students as part of the University of Adelaide’s Tech eChallenge. On top of juggling lectures, study and coursework, the 20 year olds are building a business around an evolving suite of software called GrapeBrain.

“We’re interested in agriculture. The team is passionate about the way food is produced particularly,” says team member Liam Ellul, who has a background in commerce and law.

“I think food production is going to be an issue coming up in our lifetimes and we’ll get a lot of benefit and enjoyment being involved with a business that helps  lower food prices by creating efficiency and production,” he says.

The winemakers basically said, look, you can throw as many drones as you want out there, but what we’ll pay you to do is estimate yield.

GrapeBrain started out as something very different. In the early stages of development the team was looking at general crop monitoring for agriculture using drones.

“We saw there was a lot of buzz around drones. Our first idea was strapping a torn apart smart phone on to a UAV glider, just to take it out and show we were keen. From there we realised it didn’t have to be drone hardware. It could be satellite hardware, even software,” Ellul explains.

Seer also consists of Petros Bakopoulos, specialising in finance, and Harry Lucas, the technical lead on the project who is responsible for the code that GrapeBrain runs on.

It became apparent that they had to concentrate and being based near the Barossa in South Australia, one of the world’s great wine regions, it was logical to pick vineyards for their system.

GrapeBrain is a complex suite of software that takes a number of metrics and spits out a yield result based on those inputs.

“Without giving away the golden goose, the approach that we’ve developed has come about reading research papers and also talking to the practical realities of industry,” says Ellul, who during gaps in his study drives into the Barossa wine region to quiz grape growers about their wants and needs.

“Our software, we’d take it in, get feedback, take it back and work on it,” he says.  “It turned out it wasn’t just a problem that could be solved by an app. You needed a whole platform behind it.”

The value of an accurate yield prediction can’t be understated. It has implications all along the supply chain – in the case of viticulture, everything from transport and processing of the grapes, to wine sales, to packing, to shipping can be streamlined and improved.

The team is aiming to get their yield prediction to an accuracy of within 10%. That’s a bold aim when there are currently no standard procedures in the industry. According to Seer Insights, prediction accuracy varies widely between growers.

“It can be as bad as 50% off,” Ellul says. “The benefit of this software for wineries is they have peace of mind that this is a set in stone procedure that will give them and their growers a reliable outcome.”

Seer Insights’ wants to establish an industry standardisation that will add value to the entire wine industry.

“We’re talking 10% on an organisational scale here. It’s a lofty goal but I think it’s better to dream big and do the best possible,” Lucas says.

“This is why we think building a commercial business around it is one of the most important points. If you just throw some software out there, that’s been done before. It may help people, but if you’re continually adding value, that represents a lot more for the industry.

“If we can continue to add value afterwards, then it’s not just streamlining processes for an industry – there can be entirely new processes developed out of this.”

Some of the wineries that Seer Insights have consulted with have outlined the difficulties of moving to a more mathematically based prediction process from ‘intuitive’ approaches – essentially guesstimating grape weight on the vine.

“It’s a huge logistical challenge to implement it, let alone sustain it. Any organisation could do this in house, but the value in our business is that they don’t have to maintain the systems, they don’t have to worry about updating it,” Ellul says.

“It’s good for competition as well. By having a commercially viable product that’s available to the broad market, you’re really democratising the use of technology. By distributing it evenly for everyone you can improve the sum of all the components of the industry – you’re not getting this skewed power dynamic.”

Lucas says the team has not forgotten their original target market – agriculture in general.

“There’s a lot of similar paradigms between crops,” he says. “There are differences between viticulture and agriculture, but although sugar cane might be very different to predicting the yield for grapes, the processes that you put in place to do that are fundamentally the same.”

With an ever evolving product, the individual bits of data they’re gathering can be pulled together to give a wider outlook for the agriculture industry.

“There’s a lesser known term than big data – little data,” says Lucas. “It doesn’t sound as flashy but you can apply the concepts of big data to small amounts of data at a time. The cool thing about little data is that, when you get enough, you have big data.”

Ellul, Lucas and Bakopoulos are currently riding on a wave of support and interest from research and industry bodies in South Australia.

“Adelaide is fantastic at the moment,” Ellul says. “There’s a big move for progressive thinking and the encouragement of innovation and growth of the technology space.

“South Australia is probably the best place in the world for us to be doing this in viticulture too. Our wine industry is second to none. It’s world class.”

The team use the South Australian wine industry as their testing and launch market, which will help them later in the year when they visit the United States as the prize for winning the Tech eChallenge.

“The Barossa is one of the greatest wine regions in the world,” says Lucas. “If you can go to the Napa Valley in America and say, look, the Barossa growers are using this, maybe you guys could try as well – that’s what we’re looking to do.”

A clever new app called HarvestYield is said to eliminate the tedious paper trail associated with job recording and worker timesheets, while also offering a suite of management tools.