Wine Weather: What's been going on 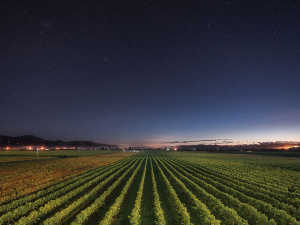 Here's a small snapshot of some of the high rainfall totals across much of New Zealand during February - 140mm at Fairhall, 375mm at Masterton, 248mm at Napier.

La Niña usually means an increased risk of rainfall in the east, and this summer has lived up to the stereotype.

Meanwhile, sunshine totals have been well below average in most eastern areas, with Napier recording just 178 hours in February. Humidity has also been above average and the number of 30C days in the east has been below average, especially about Canterbury. Constant low pressure to the north of New Zealand has meant that the North Island and upper South Island has been a battle ground as ex-tropical lows run into blocking high pressure systems to the south.

If you live and work in the east, then you might be feeling a bit ripped off with the summer weather. Conversely, many who live in the upper and western parts of the North Island might feel like it's the summer that never ends, with temperatures well above average for several months now.

We are moving into autumn and the time of change, as the nights grow longer and temperatures start to cool. The questions at the moment are: Will autumn be mild again? Will sunshine remain below average for many in the east? Will we see frost before winter?

Sea temperatures are well above average once again and this will continue through autumn as the La Niña phase slowly winds down. The very warm weather over the upper North Island is likely to continue and it is expected that temperatures will remain above average through until the the end of May. The eastern side of the South Island may be an exception, with mean temperatures near or possibly below average in parts. This is mainly due to the increased easterly flow pushing cloud and cooler winds onshore. Cloud cover may continue to keep sunshine hours below average along much of the east coast of New Zealand and that in turn is likely to keep overnight temperatures above average.

Outlook for April and May:

Mean temperatures have been above average through summer, and this is highly likely to continue through autumn. Daytime maximums may be closer to average, but night time minimums should remain above average. Sunshine totals may start to lift close to average through April and into May and rainfall totals should be near average. The only point here is that there is still potential for an ex-tropical low or prolonged northeast flow to produce a heavy rain event.

Less affected by the northeast flow, Wairarapa should see temperatures above average through into late May. Rainfall totals have been extremely high lately, but things are starting to dry out as the region falls more under the influence of high pressure. Sunshine totals should start to lift and be near average for the next couple of months.

Mild temperatures should continue, and are likely to be above average for the next couple of months. Rainfall may be close to average, but rainfall totals are going to be determined by where the main rain bearing systems come from over the next few weeks. If air pressure remains lower in the Tasman Sea, then there is an increased chance of rain about the Nelson region. Low pressure systems to the east are likely to contribute to drier overall conditions about the Nelson region.

The upper east coast of the South Island has been at the crossroads of high and low pressure. This has contributed to mean temperatures being closer to average than other parts of New Zealand and in some cases even a little below average. Much of the tropical air has struggled to reach very far south, but the cloud and easterly winds have. These conditions may continue for some time, but temperatures should ift as easterlies become less frequent later in April. Rainfall totals have been about or above average throughout summer, and rainfall should continue to run close to average through into early winter. Sunshine hours may start to lift closer to average by late April.

Mean temperatures have been running above average and are likely to keep doing so for the remainder of autumn. Sea temperatures are above average about the lower South Island and this can increase onshore humidity and overnight cloud cover about inland areas. Rainfall totals have been below average and although this is likely to continue there is still a risk of heavier rain from slow-moving fronts or low pressure systems that deepen in the south Tasman Sea.

Wine Weather: What's been going on

Late last year I talked about the influence of long range climate drivers and how they impact our seasonal weather.

Spring weather, as we all know, is a time of huge transition. Increased daylight hours mean growing days kick in, temperatures are milder, and those annoying westerlies return.

Wine Weather: From El Neither to La Niña 2

La Niña came and went in early 2021, but it felt like it never completely went away.

A warm and settled autumn has given way to winter.

La Niña is currently weakening and is forecast to fade out over the next two to three months.