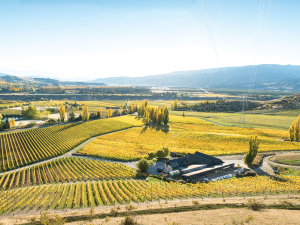 “The subregions are a story that has been told about Central Otago ever since I have been here. We talk about the wines from Gibbston or Alexandra or Bendigo,
and up until now there’s been no legal definition of what those subregional boundaries are.”

He is familiar with wine lists overseas where New Zealand Pinot Noir is itemised, followed by New Zealand’s regional wines, then a subregional breakdown of Central Otago. “Wine trade and journalists, and wine lovers around the world, are really cognisant of the subregions and potential differences that they might express in the wines.”

Following the registration of the broader Central Otago wine region in 2018, Bannockburn and other subregions have been working towards registering their individual Geographical Indication (GI) as well.

“Whilst the Central Otago brand name will always be first and foremost for the region, there has always been a concern that subregions may also be exposed to misrepresentation,” says Jake Tipler, General Manager of Central Otago Winegrowers (COWA).

“Our subregions add complexity and nuance to the Central Otago wine story, and we are very keen to see the heritage and uniqueness of these regions protected for the future. Bannockburn will now have a higher level of protection both here and internationally and this registration helps to create a pathway for other Central Otago subregions to register their GIs as well.”

Blair says Central Otago’s subregions are each unique and separated by significant distances and geological distinctions, including mountains and inland basins. Development of the Bannockburn GI was assisted by a project in 2016 to map the subregion’s vineyards, down to detail of row orientation and grape variety. “During that process we obviously had to identify where the boundaries of Bannockburn started and stopped,” he says, describing an area framed by the Kawarau River as it exits the Kawarau Gorge and arcs around in front of the town of Bannockburn, before meeting the Clutha River in front of Old Cromwell Town. “It made absolute sense that the Kawarau River was the northern boundary of Bannockburn.” The southern boundary is the 400-metre elevation line, beyond which the land becomes very steep and cold, with little - if any - suitable land for vines, says Blair. “Both of these provide a significant geographical boundary”.