Hemp among the vines 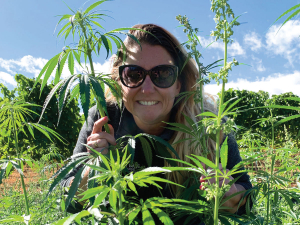 Kirsty Harkness, Managing Director and co-owner of Mount Base Vineyards in Marlborough.

It’s not what you expect to see when you visit a vineyard. Towering plants of more than two metres playing host to a myriad of insects from bees to praying mantes. A plant that has uses dating back thousands of years, and is still used today for everything from clothing to insulation. These strangers in the vineyard are in fact industrial hemp plants. And they are part of a trial, that could produce positive implications for the wine industry in New Zealand.

Kirsty Harkness, Managing Director and co-owner of Mount Base Vineyards in Marlborough, is the tour de force behind this innovative trial. Having obtained a license to grow hemp late last year, she is now focusing on whether the plant can offer positive nuances to the vineyard itself, along with providing growers with a potential secondary income.

In November last year the law changed, allowing for the first time, hemp seeds to be sold for human consumption. Up until then, while industrial hemp could be grown for a range of different products, the hemp seed itself was only allowed to be pressed for oil. That is despite the fact that the seed on its own contains copious amounts of protein, omega 3, omega 6, omega 9, magnesium, zinc and fibre. It is described as being one of nature’s richest sources of essential fatty acids.

When planted on its own, a hectare of hemp can produce up to a tonne of seeds, which given the miniscule size of the seed itself, is a solid return.

Harkness wasn’t too worried about harvesting the seeds this year, her trial was more about seeing whether the hemp plant could grow within a vineyard and what impact it would have on the neighbouring vines.

The trial was slow to begin, given Harkness didn’t receive her license (from Ministry of Health) until Christmas Eve. That meant she had missed the normal window for sowing seeds, November/December. Undeterred, she planted out two hectares in vineyards around Marlborough on January 4, the beginning of a six week period where hardly any rain fell. Not ideal. But it did give her the chance to see how the hemp would cope in super dry conditions.

“We had only 10mm in a 70 day period, yet the hemp grew outside the vines to two metres tall. It was growing a foot a week, in front of our eyes.”

With four different sites, Harkness was able to trial different irrigation water rates over the growing period. Some were watered at the beginning, some were watered just once in the season, some for four weeks and some for six weeks. Some received no water at all.

“The plants I watered for six weeks grew the best,” she says. “But normally you would plant in November and they would get those spring rains, that would have the same effect.”

The plants also attracted insect life, in numbers Harkness found hard to believe. Bees, honey and bumble, praying mantes, ladybirds and caterpillars among others created such a din, it was the equivalent of an engine running.

“I have never experienced anything like that before. It was fascinating!.”

Part of the attraction may well have been the fact the hemp leaves undergo guttation, where the plant finds water deep in the soil and brings it up to its leaves, making it available for the insects. And with a feeder root that goes straight down, she doesn’t believe hemp threatens the vine’s water uptake. In fact hemp is also believed to bring up Potassium from lower down too, making it available for the vines But more research on that is to be conducted this coming season.

While there are 13 hemp cultivars available for New Zealand growers, due to Harkness’s late plant date, Kompolti was the only one available. Growing to more than two metres, it isn’t the most ideal for inter-row cropping but she says it was a great trial starter. Other cultivars that are much shorter and won’t compete with fruit for sunlight may be trialed this coming year.

“We plan to trial a few different cultivars this coming season, including a 100-day from when you plant, vegetative cycle cultivar. Our trials will include different planting months, starting in September, to see whether it makes a difference, before we have full budburst and competition with canopy for sunlight hours.”

As for the mulch from the hemp plants, Harkness says it’s exceptionally good.

“We mulched what we had and placed it under the vines as a trial and because it has a resin in its trichomes it is sticky and sets itself. It doesn’t blow away like straw would and if you lift it up it is damp underneath. (Hemp holds four times its body weight in water). There were also no weeds growing through it. So far it has exceeded our expectations as it grows large quantities of biomass and I am looking forward to larger trial areas in the season coming. It was everything I had hoped for and some.”

Vindicated from the first year of trials, Harkness is planning to plant out 60 hectares around Marlborough this coming spring. Thoughtful Viticulture’s Mark Krasnow will conduct research on how the hemp impacts on the vine’s nutrient and water uptake, how it affects vine health, what the mulch provides to the soil structure, while other research will look into whether hemp impacts on wine flavours and aromas.

While Harkness is the very first New Zealand grape grower to plant industrial hemp among vines, (and potentially the first in the world licensed to grow both) she is unlikely to be the last. A large number of wineries and number of growers have approached her for advice on the how, whys and wherefores of growing hemp. Consequently, she has established a Facebook page, VinHemp – Vineyard Hemp Cover Crops NZ, where she will constantly update information.

On another note, Harkness was elected as an executive member of the New Zealand Hemp Association, in late June.

Hemp is not marijuana

Many people get totally confused when it comes to distinguishing between hemp and marijuana. It’s not surprising, given the two plants look very alike and even smell alike.

The difference is that hemp plants contain no more than 0.3 percent (by dry weight) of THC (tetrahydrocannabinol), the psychoactive substance found in marijuana. By comparison, marijuana typically contains 5 to 20 percent THC.

The low rates of THC in hemp mean they do not produce psychoactive effects when ingested.

There’s new evidence that hemp growing amid grapevines may boost the diversity of native yeasts in the resulting wines.

With hemp production expected to increase in New Zealand over the coming years, it might not be too long before we see some strange looking machines out in the paddocks.

Hemp sector gears up for growth

The New Zealand hemp industry appears to be coming of age.