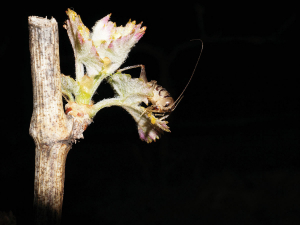 Awatere Valley vineyards are proving a happy habitat for an endemic species, with the 'wine wētā’ burrowing amid the rows, dangling off the wires and dining on fresh buds and sap, while also devouring pest insects in the vines.

A paper published in the New Zealand Journal of Zoology explained the findings of Massey University research at Cable Bay Vineyard on the coastal Awatere Valley, including the ability of the ground wētā (part of the genus Hemiandrus) to climb over plastic vine guards, up vines and along vineyard wires. "Rarely in New Zealand are native animal populations influenced positively by anthropogenic habitat modification, but in the Awatere Valley the irrigation of vines seems to provide Hemiandrus bilobatus with suitable conditions to thrive," says the paper. "Further work on the biology of this species throughout the year would be useful to elucidate its role as predator within this system, and indeed to learn about the evolution, ecology and resilience of endemic biodiversity in a rapidly changing world."

Mary Morgan-Richards, Professor in Wildlife Evolution at Massey University and co-author of Ecology and systematics of the wine wētā and allied species, with description of four new Hemiandrus species, says it was clear from nocturnal observations on the vineyard, as well as analysis of gut content, that the wētā are omnivorous, feasting on insects, including exotic species of harvestmen, flies and weevils, as well as grapevine and other plant matter. “We think that they probably eat everything that they can find,” she says, noting that interrow plants such as clover will also appeal to the wētā. “But it’s not really the food they like the best; they are more carnivores and scavengers. So when there is a lot of other insect activity around, probably the wētā will be feeding on other insects.”

The paper notes that past observations of many Hemiandrus species suggest a diet that is primarily carnivore, scavenger or omnivore, so “the potential role of wine wētā as predators of other pest species should not be ignored”. However, in spring, perhaps with a shortfall in insects and the abundance of fresh growth, the wētā are proving destructive in the vines, says Mary. Within an area of 480m2 they calculated there were approximately 1,700 ground wētā, with an estimated density of 3.4 individuals per square metre. The researchers observed adult females hiding in their burrows during the day, in which the insects also lay eggs. Most of the active wētā were on the ground, but they also observed wētā climbing vines and eating buds, while others were feeding on sap or were moving and not feeding. “We understand the numbers are higher than what they would be if you were not irrigating, and it would be nice if there were fewer in the spring,” she says. Future research might help mitigate the impact, perhaps by finding alternative foods at certain times of the year, when vines are sensitive to the wētā, she adds. “It will take quite a while to establish which tools will work best.”

Pernod Ricard Winemakers South Island Viticulturist Andrew Naylor says wine wētā present a “significant challenge” to grape growers, complicated by the fact that they’ll hit one area unexpectedly, and then another in other years. “You are not sure which part of your vineyard they’re going to hit next.” And the impact can be catastrophic for the crop, with the insects able to wipe out 90 to 100 percent of the buds in the area where they are active, says Andrew. One example was an 11-hectare block in a coastal vineyard in the Awatere Valley that was “nice and green as buds burst and leaves unfurled, then a week later there was a bald patch of two to three hectares that was brown”.

The wētā climb the trunk and “graze” the newly emerging buds at “popcorn” size, says Andrew. “They are relatively big critters and it doesn’t take them many bites to chew that bud off completely, which is this year’s crop gone from that bud. They just basically go along and nuke your budburst.”

He has weathered wētā in Pernod Ricard vineyards since 2005, when he thought a portion of the vineyard was slow to hit budburst, while the rest of the block transformed with a “lovely green tinge”. A closer look revealed that the buds had burst and been eaten, leading to a recognition of the wētā as a crop-stopper, he says. “There’ll be a green ring along the outside of the block, but the middle is completely nuked.”

Andrew says the wētā are active all year round – “we have seen them on gondolas in the middle of harvest, because they’ve been shaken off the vines” – but the yield is only impacted at the vulnerable budburst stage. Vineyards in the affected area typically have plastic sleeves over vine trunks, akin to the strips used to stop possums from climbing power poles. When new, shiny and slippery, the sleeves do present an obstacle to the wētā, but the solution is far from ideal, says Andrew, who hopes affected industry members can collaborate to produce a more environmentally sustainable, robust and effective guard for the vines. “If that was a frostaffected area we would put a frost fan up… So you have got to invest in some sort of prevention strategy.”

Massey Univers i ty ’s nocturnal observations saw wētā almost entirely undeterred by the plastic sleeves erected as a barrier on Pinot Noir vines, with wētā on vines with and without sleeves. When it came to Sauvignon Blanc, the sleeves acted as a partial deterrent, with fewer wētā on guarded plants. But Mary is more surprised by the sleeves’ success than she is their failure. “They’re amazing climbers and able to climb up very shiny slippery leaves, as well as plastic,” she says of the wētā. “We don’t know why the sleeves work at all because we could see, by looking at night, that they were able climb over them.”

Mary and Steve Trewick, who is also of Massey’s Wildlife and Ecology Group, will present some of their findings at a Wētā Information Day in Seddon on 19 October. They are keen to hear more from people affected by the wine wētā, says Mary. “We want to know what the winegrowers are experiencing, as much as we want to tell them what we know.” Much can be learned by going out at night with a head torch and seeing what the wētā are doing, she adds “So if you are putting on plastic sleeves, you can see if it is working and if wētā are climbing up them or not.” With more anecdotal observations, researchers will be able to start “firming up what to do next… and what we can do to try and help people”.

Not a day goes by that Awatere Valley grape grower Andy Peter doesn’t think fondly of his father, who firmly believed in succession.