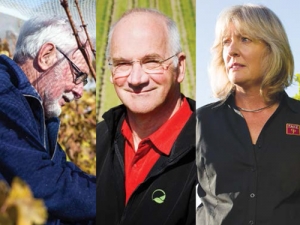 Three well-known members of the New Zealand wine industry have been inducted into the NZW Roll of Fellows.

Central Otago's wine industry could well be called Central Brady, given how much he has helped place the region on the world's wine map.

He planted the first vines in the Gibbston Valley region in 1981, then planted the "Home Block", the first commercial vineyard in Central Otago in 1983 and this was followed by the first commercial vintage in 1987. In 1990 Alan established Gibbston Valley winery a boutique winery and cellar door and a home for Central Otago wine. In 1998 Alan set up Mt Edward winery which he sold in 2004 with the intention of retiring but this didn't last long and in 2006 he established another very successful Central Otago label, Wild Irishmen which he still owns today.

Renowned for being the go to guy when it comes to anything to do with what's happening out there in the vineyard, Dr Mike Trought is the senior scientist for Plant & Food in Marlborough. While his name is synonymous with wine research, he has also been a lecturer at Lincoln University and was the senior viticulturist for a period for Villa Maria in Marlborough.

But it is his innate knowledge of vines that has seen him become a household name to grape growers. Especially when it comes to the tricky questions surrounding potential yields – no one has a better handle on the upcoming season than Mike.

He has produced dozens of papers on wine research and is considered one of the world's eminent wine scientists. Along with his commitments to New Zealand wine, he is also regularly asked to speak at international conferences. Mike was the first New Zealander to be offered a position on the Australian Society of Viticulture and Oenology (ASVO), a position he still holds.

In 2009 he was the NZ Winegrower Personality of the Year.

Just as Alan Brady is an integral part of the Central Otago wine scene, Kate Radburnd is in Hawke's Bay.

A graduate of Roseworthy College, she is currently the co-owner and Managing Director of CJ Pask winery. Throughout her career, she has given a considerable amount back to the Hawke's Bay and New Zealand wine industries. Her many roles include; a Board member of Hawke's Bay Vintners, Director of the Wine Institute of New Zealand between 2003 and 2013, including the Deputy Chair position for nine of those year. She was a Director of New Zealand Winegrowers from 2002 to 2013, a senior judge of the Air NZ Wine Awards and Chair of judges at the Royal Easter Wine Show. She has been a wine consultant to Air NZ and is the Deputy Chair of the Council of EIT.

While she is highly respected as a winemaker and wine judge, Kate has also played an instrumental role in bringing sustainability to the fore in New Zealand, having chaired the SWNZ committee for five years.

Bold colours, oversized suits and permed hair were all popular in 1987.

Winegrower takes an in depth look at how the season has gone for growers across the country.

Biosecurity risk — when, not if

A biosecurity risk to the New Zealand wine industry is very much a case of when.

The monitoring of 28 vineyard sites in five wine-growing regions of New Zealand, has provided the first ever start of the season weather picture for the industry.