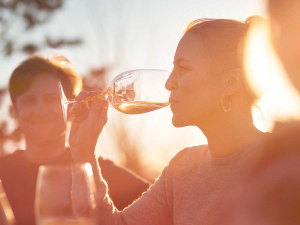 Wendy and James Healy have turned succession somewhat on its head, retiring from a wine life in Marlborough to join their daughter’s business in Nelson.

Sophie and Mark McGill established Abel Cider in 2015, drawing on childhoods immersed in the wine industry – her father a winemaker and his a viticulturist – to ferment to their hearts’ content.

When James – with his four decade legacy in Marlborough’s wine industry – began to ease back from his role at Dog Point Vineyards, he and Wendy moved to Tasman and invested in Abel. Now the company has vineyards in the clay soils of Upper Moutere, and a Chardonnay to complement its Abel Méthode Cider. “It’s just awesome land,” says James of the 30 hectare block, partly apple orchard, partly vineyard, on gentle north facing slopes.

Of their four children, Sophie is the only one with the fermentation bug, says James, chuffed that she and Mark, a qualified winemaker, are making their own way in the wine world. “Wendy and I are very much in the background of this thing,” he adds. “No one wants to see old people - they want to see young people - so we are very happy.”

Sophie says the choice of Chardonnay was in no small part down to James’ hallowed reputation with the variety, bringing extraordinary expertise to the Chardonnay side of Abel. “Mark jokes that he has the best cellar hand ever,” she laughs. Add to that Nelson’s ability to grow beautiful Chardonnay, and it’s a lovely match, she adds, talking of a team effort behind the style and winemaking. “Conceptually it is shared, and it is awesome having dad there with his experience.”