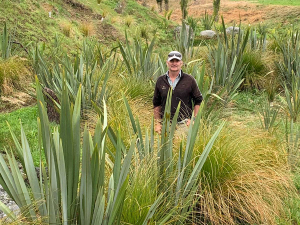 Felton Road Wines is restoring native plantings on public land near its Bannockburn estate, with Winemaker Blair Walter hopeful other businesses will get on board.

The previously publicly owned inaccessible land on the shores of Lake Dunstan is on the new 55 kilometre Lake Dunstan Walking and Cycling Trail, linking the townships of Clyde and Cromwell through the Cromwell Gorge.

The restoration began after Blair identified a 3-hectare parcel of wasteland on the lakeside adjacent to Felton Road’s Cornish Point Vineyard and applied to Land Information New Zealand (LINZ), the Government body that administers Crown Lands, for access consent to carry out weed removal and native plant restoration work.

He says wilding conifers had previously been removed by the Central Otago Wilding Control Group, and now woody and thorny scrub, including sweet briar and gorse, will progressively be cleared to give way to re-establishing native plants. It’s a tough job, but clearing the weeds will greatly enhance trail users’ views from Cornish Point across Lake Dunstan to the Cromwell Heritage Precinct and beyond. “It’s a good opportunity for our company to give something back to the community and to the environment,” says Blair. He expects that over the next two years they will liberate existing native species, such as mingimingi, tūmatakuru/matagouri, toetoe and kōwhai, then plant locally sourced species including kānuka and more kōwhai.

He likens the approach to the “Adopt a Highway” programme in the United States. Felton Road Wines has also put a similar proposal to LINZ to clear and plant lakeside land bounded by its Calvert Vineyard and Te Kano Estate in Bannockburn. Felton Road had previously cleared the poplar and willow-choked Pipeclay Gully leading to it and planted native riparian species and, if approved, the lakeside project would be a collaboration between the two vineyards.

Blair says he's heartened to see and hear birdlife re-establishing in the Cromwell Basin that weren't there when he arrived some 25 years ago, including korimako/bellbirds and tui, and even a recent sighting of a pair of pukeko near Lake Dunstan. Central Otago Winegrowers have supported native plant restoration and enhancing biodiversity in the region through the Central Otago Pinot Noir Charitable Trust. Blair says both the Te Kakano Aotearoa Trust in Wanaka, founded by Nick Mills of Rippon Wines, and the Cromwell-based Mokihi Trust, which Blair chairs, had been helped with grants.