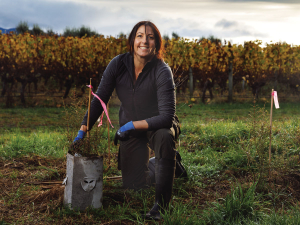 Tracey Marshall at the Kaituna Wetland. Photo by Jim Tannock.

But her favourite topic of conversation is far closer to home, amid Marlborough's flourishing Kaituna wetland, where 13 years of planting and pest work are rewarded with an abundance of trees, raupō, birds and insects.

"We do have a lot of vineyard land here in Marlborough and one of the biggest impacts of vineyards is the loss of biodiversity", says Tracey, who is Sustainability Manager for Pernod Ricard Winemakers New Zealand. "It's really rewarding from a personal and community perspective - it's so visible, and it helps in so many ways." The wetland has long been a focus for the company and a passion project for Tracey and her colleagues, so reaching the stage where maturing trees are becoming reproducive is extraordinarily rewarding, she says.

And given it significant scale - with five hectares of the 9ha wetland now protected by a QEII National Trust covenant - it's become a shining example for Pernod Ricard businesses and affiliates of a commitment to protecting land in the communities they work in.

The wetland is surrounded by other environment-enhancing initiatives, including organic vineyards and a 60ha regenerative viticulture project. "It's becoming a really cool place to visit, because you can see everything happening," says Tracey of the Kaituna Vineyard. The "fairly meaty" regenerative viticulture block is exciting, because of the amount of data they can collect, she adds "Again, we are looking for scale. Not putting aside a little corner and calling it a trial."

Some of the practices in place, such as interrow cropping and beneficial plantings, are already in use on their other vineyards, "but it's about expanding on that and saying, 'let's take it further'," Tracey says. They are learning how to measure the impact of actions, including through a regenerative index where they can record scores.

New Zealand soils are relatively young and fertile, so there's less work ahead in terms of nurturing organic matter, compared to many other wine regions around the world. "We are already in a good space about that. So, it's about retaining and improving, but also with a focus on more opportunities above ground, with supported biodiversity and insect life and so on."

The project is aligned with the 2030 Road Map, which aims to have regenerative agriculture pilot projects within all Pernod Ricard's vineyards, in eight wine regions, by 2025. The Kaituna wetland work - as well as substantial plantings on other vineyards - is also on track, given a target that all the group's global affiliates will have a strategic biodiversity project by 2030.

"It's really fit for purpose in the era we are in now and building on a lot of what we have done," says Tracey of the Road Map, which has numerous new commitments across four key pillars: nurturing terroir, valuing people, circular making and responsible hosting. "It has really accelerated and set some quite meaty goals, particularly around carbon and climate change, biodiversity and communities."

Among the targets, which support the United Nations Sustainable Development Goals, is that 100% of its packaging will be recyclable, compostable, reusable or bio-based by 2025, following on from the 2021 ban of all promotional items made from single-use plastic. Meanewhile it has committed to reducing the overall intensity of its carbon footprint by 50% by 2030, with a target to reach net zero overall by 2050. That will be achieved through reducing emissions within their own companies via new technologies and alternative energies, while working with the supply chain to help lower the overall carbon footprint, including through packaging, agricultural materials and transportation, says Tracey.

Strategic plans are measured and reported and they look ahead at what outcomes of each action will be, so "we are not just aiming in the dark", she adds, enthusiastic about such a "disciplined approach".

Sustainable Winegrowing New Zealand and New Zealand's natural resources, along with their longstanding biodiversity programme, gives Pernod Ricard Winemakers New Zealand a bit of a "head start" in some areas, helping them achieve goals that other regions are still grappling with. For other targets, such as waste minimisation, it can be more challenging. "We have certainly achieved a massive reduction and made some major progress, but we still have that last little bit where there's just nowhere it can go in New Zealand."

She is grateful for the learnings shared by partners around the world and says collaboration is key. "We get access to new and emerging ideas, technology and trends. It feels really good being in a wee town like Blenheim and working in a global context."

On 16 June, 18,000 Pernod Ricard employees around the world will put down work and pick up tools for the annual Responsib'All Day, working for people and planet in more than 100 local communities around the world. In New Zealand, 400 staff will plant 5,000 natives across the country, working with Conservation Volunteers New Zealand to plant thousands alongside Papakura Station in Auckland and Owhiro Station in Wellington, while also planting around company wetlands and vineyards in Hawke's Bay, Waipara and Marlborough.

Making their marc on soil health

When Rapaura Springs bought a vineyard in an arid and windswept pocket of Marlborough's Blind River, building soil health became their focus.

Managing the land and vines with a century-long outlook is business as usual at Paritua, says Winemaker Jason Stent.

Viticulturist Richard Hunter stepped outside the box and into the blocks when transforming Avon Valley sheep paddocks into productive Sauvignon Blanc crops.

Connecting people and place at Rippon

As winter draws Rippon to its "lowest ebb", its community gathers for Matariki, in celebration of nature's new year.