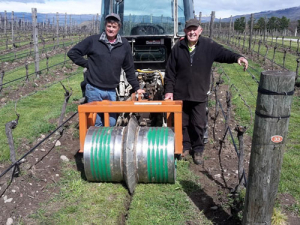 A new approach to viticulture has been developed in Amisfield in Central Otago, which can improve the sustainability of drip-irrigated organic vineyards worldwide.

In fact, these techniques will likely also find application in sustainable and conventional vineyards as well, as they are based on current concepts of economically sustainable production. These ideas are quite novel, hence the title inferences about sustainability, normally considered an alternative to organic production. But this new approach at Amisfield does lead to better vineyard economics within a more sustainable environment.

Amisfield is a 90-ha vineyard planted in 2000. The owners decided to develop the vineyards as organic in 2013 and complete certification will be achieved by 2021.

The Challenge of Viticulture in Central Otago

Central Otago is cool in summer but quite sunny. The region around Amisfield is quite arid, with only 360 mm of annual rainfall of which 240 mm falls in the October to April growing season. Drip irrigation applies around 200 mm per season.

The soils of the region are generally light textured, often sandy loam and contain significant quantities of stones and gravel. They have low water holding capacity and as well low nutrient content and low organic matter, as there is little native vegetation in this arid climate.

The combination of the cool dry climate and low retention soils presents problems for conventional viticulture which are exacerbated with the use of organic principles. Deficiencies of many nutrients are common, especially N, P, K, S and Ca. Low levels of yeast available nitrogen (YAN) are also very common, especially with organic vineyards.

The Further Challenges of Organic Viticulture

The challenges of organic viticulture are not unique to Central Otago, but the environment there makes organic viticulture more difficult. Weed control under the organic regime is always problematical in drip irrigated vineyards. Mid row cultivation and or mowing can control competing weeds and is easy in drier climates like Central Otago. However, under-vine drip irrigation encourages weed growth, and the presence of trunks and line posts compromises mechanical weed control by cultivation, especially with vigorous perennial weeds. This problem is overcome in conventional viticulture with herbicides.

A second challenge is the ban on “chemical” fertilisers, and especially nitrogen. A common appearance of organic vineyards in New Zealand (and elsewhere) is yellow nitrogen-deficient vines, often with reduced vigour. Animal manure and compost has low N content and is therefore expensive to transport and spread and is often reliant on nearby livestock farming. This nutrient supply problem is exacerbated on lighter texture soils, especially those with low organic matter as in Central Otago.

Development of the Amisfield Approach

This has been a team approach, with the South African-born Andre Lategan, the Amisfield Vineyard Manager, being a major contributor. Andre was trained in viticulture at Elsenburg College and after working in local Cape vineyards moved to Central Otago in 2001 and has been managing Amisfield since.

I recall Andre’s anxiety about the conversion to organics during a consulting visit in 2013, and his principal concerns were for nutrition and weed control. My suggestion was to use geo textile fabrics for under vine weed control, but Andre’s inventive mind has considered an alternative, and probably simpler approach, which has led to the Amisfield system described here. And this was a very good example of lateral thinking – figuratively; by moving the irrigation system laterally.

He reasoned that weed control would be much easier if he stopped watering under vine, so why not irrigate mid row, where weeds were easier to control. Why not?

Andre further reasoned why not bury the drip system, to allow weed control by mowing rather than by tillage, which is another of Andre’s concerns in these fragile soils.

But not to bury the drip system deep, just at 10 cm to avoid any implement damage. Andre’s logic here is that this will encourage the greater lateral spread of water and hence vine roots.

There is currently some commercial interest in buried drip systems mid row, but this is a very different approach to that followed here.

This is the first question which will come to mind for the grape grower. Are not all the roots in the berm, underneath the vine, occupying a better soil environment, more moist because of irrigation, and cooler because of canopy shade? The answer is yes, more or less. Figure 1 shows clearly the within-berm concentration of large and fine roots with conventional irrigation at Amisfield. 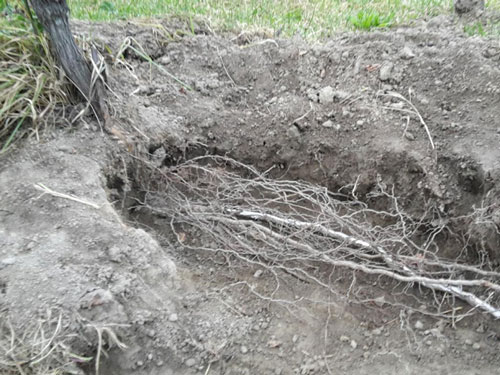 However, we know that roots will grow in wet soil, and that they are encouraged to grow in the mid row by occasional winter-spring-autumn rainfall, and growth is inhibited by summer. Andre tested his ideas beginning in 2010 by installing second hand drippers in the midrow, for a 1ha planting of Pinot Noir on 3309 rootstock. For five years he maintained both the under vine and mid row irrigation systems, dividing water application between the two, and then in 2016 he stopped the under-vine irrigation altogether from the beginning of the season.

The result was surprising. There was only a minor setback in early growth of vines previously with under-vine irrigation, and no effect was noticeable by the end of the season.

For the last two seasons yield was maintained at 7t/ha with well ripened Pinot Noir grapes. Andre now believes that vines will adjust to mid row irrigation, by developing a root framework to the middle of the row, with a zone of high feeder root density under the drippers. Figure 2 shows roots growing to the row centre and the growth of fine vine feeder roots around and below the mid row dripper tube. 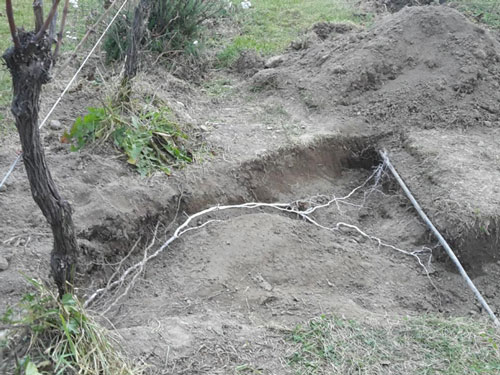 This was Andre’s second “light bulb“ moment. He thought why not grow a source of nitrogen in the mid row, and as well produce some much-needed organic matter. Clover seeds were hand spread in a 80 cm wide band over the mid row dripper line in 2016 and lightly “spiked” and rolled in.

Irrigated legumes in pastures in the South Island of New Zealand will produce up to around 3,000 kg/.ha of dry matter and fix around 100 kg N/ha. For a strip of vigorous legumes occupying 40 percent of the vineyard area we might expect 1,200 kg/ha of dry matter and 40 kg N/ha. Prior to converting to organics, Andre found that 10kg/ha/year of N gave adequate canopy growth and YAN values of up to 300 mg/L. 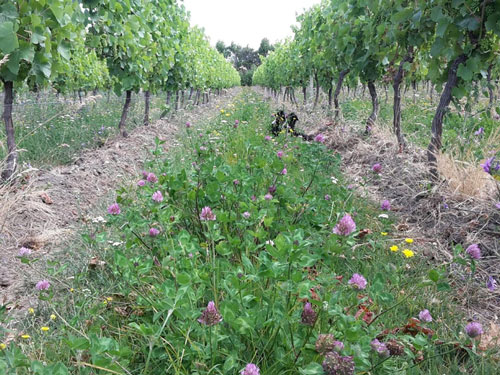 Andre has the assistance of retired farmer Bert Sim with exceptional metal working skills in the project.

Bert has developed a simple device to allow mid row irrigation to be installed. The “cleaver” roller is a simple towed implement, made from a metal drum (filled with concrete) which can be pulled (and lifted by a tractor. A similar implement called the “spiker” was developed for use pre- and post- legume seeding.

There are two principal benefits of the approach. The first is that under vine weed control is facilitated by reducing weed amount and growth, due to competition from the established vine root system. Now at Amisfield only three passes of the undervine weeder are required per year compared to the previous six using under vine irrigation.

The second benefit is that rather than some irrigation water being wasted by transpiration of weeds, it is now used to “grow” nitrogen supply to the vines, using solar energy and the rhizobia bacteria of the legumes. The resulting summer growing sward is easy to manage by mowing, and there is valuable organic matter addition to the soil from the legume sward clippings.

Amisfield: Organic wine of the year

Five years after starting their journey towards BioGro certification, Central Otago’s Amisfield has been named Organic Winery of the Year in the NZ Organic Wine awards.

Richard Smart is no stranger to the wine industry in both Australia and New Zealand. Which is why his comments in the article New Zealand Versus Australia are so worthy of reading.