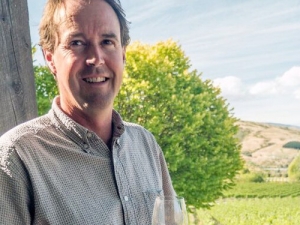 Especially in a day and age where we are constantly reminded to eat less, exercise more and only choose food your Grandmother would recognise.

As the maxim to drink responsibly is a message that health professionals love to promote, surely a wine that actually achieves this, should be lauded and not languish on a dock?

Well, according to Felton Road winemaker Blair Walter, the issue surrounding 1000 bottles of their 2015 Bannockburn Riesling is a little more complicated than you might expect. Due to a historic EU rule, wines from outside the EU with an alcohol percentage lower than 8.5 percent aren't allowed to be sold there. When you consider that German Rieslings regularly sit between 7-9 percent and Moscato d'Asti and other light, fizzy Muscats at 5-5.5 percent, it's entirely understandable that producers outside the EU might be a little baffled.

Curiously, the incident created enough interest for the mainstream media to report on it, something that irked Walter when he read some of the ill-informed comments that accompanied the stuff.co.nz piece.

"Look, when the story broke I was made to look stupid because I didn't know about the lower alcohol limit, but why should I?" says Walter. "I've been drinking great German Rieslings for as long as I have been in the wine industry and they are regularly 7.5-8 percent alcohol, so it never entered my mind that they were allowed in Europe and yet we weren't allowed to ship ours to Europe. In fact, probably the most expensive wines on the planet, the ice wines and Trockenbeerenauslese's from the great German producers are regularly 5.5-6 percent."

Speculating that the regulation was originally put in place to protect consumers against poor quality vintages entering the EU, it does seem slightly odd that this is the first time in 20 years of exporting wine, that Felton Road have fallen foul of the rule. As the law actually allows for the alcohol level to be rounded to the nearest 10th of a percent, the 2015 Bannockburn Riesling only missed the magical cut-off by a mere 0.01 percent alcohol.

"What made it even stranger was that the 2015 was quite possibly one of the best Rieslings we have ever made. It has a racy acidity, which allowed us to make a style of wine that is modeled on great German Rieslings. Because the vintage had a good steely mineral acidity that deserved a little more sugar, the alcohol hit territory that we hadn't been to before," says Walter.

Having stopped the wine purely on taste and intuition, Walter is quick to point out that because their bottling had been delayed and they had to meet a tight shipping schedule, the wine was dispatched for shipping before the export paperwork had been completely ticked off, which included a laboratory analysis for the alcohol content.

"To be honest we thought nothing of it as there has never been an issue. When the VI1 form was being produced, the wine was sitting in a container on a wharf awaiting shipment and when the analysis came back at 8.44% alcohol we had no other option but to pull the wine out of the container."

Regional laws concerning wine are much older than the EU itself, so a certain amount of flexibility has been applied to member states within the union. This might explain how German producers are able to market wines under the mystical threshold, so what is the chance something similar will happen for New Zealand producers? Walter hopes that New Zealand Winegrowers can find an exception to the ruling (derogation) so that a handful of affected wineries producing wines in this lower alcohol range can target the EU as a market. However, even entering into this process may open up a can of worms.

"The derogation will have to be registered against a particular region, which will mean that we'll need defined Geographic Indications (GI) to show that a wine comes from a specific region. For instance, it might specify that Central Otago and Marlborough are allowed to produce Rieslings below 8.5 percent and be considered normal wine.

"We have growing conditions here in Central Otago that really suit Riesling being made in this Germanic style. There are not that many places outside of Germany that can achieve this knife-edge precision of the acid and sugar."

Felton Road's recent experience might appear to be an isolated anomaly, but further north in Marlborough, Fromm don't even try to market their Riesling Spätlese in the EU. At just 7-8 percent alcohol that is just the way winemaker Hätsch Kalberer likes it.

"We have discussed making the wine with a higher alcohol content so that we can export it to the EU, but that would just change the style," says Kalberer. "What we have is something that is a lot more similar to the extreme versions of German wines in the Mosel-Saar-Ruwer, and we believe if you are doing something and are really happy with it, why would you change it just because of a technicality. The wine is more important than EU regulations."

Fromm have been following Felton Road's issues with more than a little interest. As they regularly ship wine to Switzerland, if their wine is transshipped through an EU country there can be additional complications even though the intended destination is not part of the EU.

"I was really pleased that this happened to Felton Road as that might mean that Nigel Greening will get onto it. Unless someone raises the issue, no one in the EU will be remotely worried about a couple of small wineries from New Zealand having some wines that we can't export."

Though, it might just not be a select sample of Rieslings sitting outside those strict parameters that are affected. What about the burgeoning trend towards lifestyle wines? With the Ministry for Primary Industries (MPI) and NZ Winegrowers pumping money and resources into research that will hopefully position New Zealand as a leading producer of high quality, lower alcohol-calorie wines, the EU stipulation on minimum alcohol content could be a real bugbear.

For now, the Chinese look likely to benefit from the regulation, as Felton Road's Chinese importer noticed the article and immediately offered to take the consignment. But that doesn't necessarily mean that Felton Road's European customers will miss out either.

"We are also going to submit it for testing again in May when we have our next shipment going to the UK," says Walter. "For a wine label to be accepted into the EU market, it has got to be expressed in decimals of 0.5 or .0, so you round to the nearest and as we are only looking for a variance of 1/100th of a degree of alcohol, I am confident that allowing for a variation in testing equipment and conditions, the wine will meet the requirements and get issued a VI1.

"We're here to make the best possible wines that we can, and naturally we we are fitting into the trend towards lowering alcohol consumption. If the wines are under 8.5 percent, then so be it. We won't ship to the EU until the issue gets resolved. We should be encouraged for making highly regarded quality wines at low alcohol levels. It seems insane to say that you can't sell something because the poison isn't strong enough."

With millions of dollars being invested in the NZW Lifestyle Wine programme, just how much do the world's consumers want this style of wine?