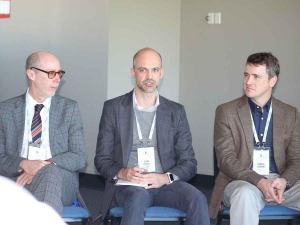 One of the sellout sessions at Bragato was Let’s Talk Plant Breeding.

On the panel were Jack Bobo CEO Futurity, Dr Clark Ehlers Acting General Manager, Hazardous Substances and New Organisms, EPA, and Dr Darrell Lizamore Principal Scientist Bragato Research Institute. The session took on a Q&A format with the experts answering the questions and concerns of those attending. Tessa Nicholson looks at those questions and the answers given.

What is the current state of play in terms of how New Zealand is looking at GMO’s?

Dr Clark Ehlers: Just recently the Royal Society of New Zealand released a report where a panel of experts looked at genetic modification in the New Zealand landscape, particularly from a legislative perspective. They looked at scenarios from three areas where they see genetic modification could have significant future impacts. Including primary industry, health care and pest management.

In that report they have identified the fact there are misunderstandings in terms of what constitutes genetic modification, what is gene editing, and what are transgenic techniques. Following from that, the Prime Minister’s Chief Science Advisor released a briefing note on the report. She noted perhaps there should be conversations that include strong Māori participation about genetic modification in New Zealand. Perhaps that time should be sooner rather than later because there may be real benefits, we could potentially win from looking at gene editing or genetic modification in the larger sense in New Zealand with improved understandings of what the risks are.

Particularly in the areas of pest management and climate change. What that means though and this is the hard part, is that someone needs to lead this discussion, so people are familiar with it and start talking about it.

How does the Environmental Protection Authority (EPA) determine if a GMO will be allowed?

Dr Clark Ehlers: From the regulator’s perspective, we administer the legislation and we apply what the legislation tells us when we have to assess the creation or the release of a GMO in the moment. To date, we have approved 2002 applications to import or develop GMOs in containment facilities, two active field trials and five releases of GMOs for application in the healthcare space. We undertake a risk assessment from the information that is provided to us and what we can source in the published literature. What are the adverse effects on New Zealand’s environment if any, on our economy, if any, on our society, communities, public health or on Māori? So cultural perspectives are critical to the process EPA employs.

But the flip side is we also look at the benefits. So, what are the benefits to the environment, to the economy, to communities, to public health and potentially to Māori as well?

It is very much based on a benefit versus risk assessment. What that means if anybody is interested in releasing a genetically modified plant or a yeast, they can apply to the EPA for a benefit and risk assessment supported by evidence in the application. If you intend to field trial or release a GMO plant or a yeast your application will need to be publicly notified. Through all of that we take all the information, science and evidence, and what New Zealanders have submitted on the application into consideration. We are looking for information on what this will mean for the particular industry, for New Zealand as a whole and also specifically for Māori.

Once we have all this information, a decision-making committee, which is an independent entity within EPA, will consider the evidence and where the benefits would outweigh the risks, an approval could be granted to field trial or release a GMO here.

Is our current legislation likely to hold us back if something dramatic happens in the future?

Jack Bobo: I think the greater risk is in the longer term. Because with climate change there will be new challenges that the industry faces. The question is going to be whether or not you have technologies that are ready to go in the time the problem arises, or whether you don’t begin to develop those technologies until the problem is there. That will be the challenge.

In the US we have a problem with citrus greening and it very possibly could wipe out the entire citrus industry in the United States. That would be pretty dramatic. Whether or not they are allowed to use genetic engineering to solve the problem could determine whether an entire industry survives or fails. I think part of the importance of research institutes is that though they aren’t necessarily developing products for today, they should be allowed to look down the road so they can say, well someday you may want this and we want you to have the option. They are not trying to require you to do it but giving you the possibilities should you need them.

Is CRISPR technology lower risk than other NBT’s?

Dr Darryll Lizamore: Australia has recently passed a regulation on NBT’s (new breeding techniques) which distinguishes between two types of CRISPR. If any foreign DNA, any bacterial DNA, anything that doesn’t come from the host organism, remains in the plant then that is considered transgenic, that is a GMO.Whereas if you produce a change that is indistinguishable from the type of changes
that occur naturally, with no foreign DNA introduced, then that won’t be regulated as
a GMO.

I think it is really important (here in New Zealand) that we separate the idea of introducing foreign DNA to generate a product that could not have been produced naturally, from gene editing techniques that don’t leave any foreign DNA. The fact that these two things are lumped under the same umbrella is not helpful to any discussion we have about these techniques.

Has New Zealand approved the release of any GMO’s and what were they?

Dr Clark Ehlers: Yes, we have approved the release of GMO’s in New Zealand in the human health context. The last one was earlier this year and it was for a vaccine against Japanese Encephalitis. Essentially it is a current vaccine that helps workers who travel to these countries where this disease is prevalent in South East Asia.

That vaccine has been approved as genetically modified. It went down the regulatory pathway that the EPA uses that applies to medicines.  The EPA approved the use of this particular GMO vaccine for the use in health care workers, because the decision maker deemed that it would be highly improbable for the vaccine to pose significant risks to the health of the public or valued species.

Prior to that we have also approved a few of GMO vaccines for cancer trials. Liver cancer being the first one back in 2015. Those vaccines are genetically modified, and they are constrained by controls on their use and can only be administered by healthcare professionals, in a controlled trial for example.

Bayer Young Vit of the Year

For the second year running an emerging leader from Central Otago has taken out the national title of Bayer Young Viticulturist of the Year.