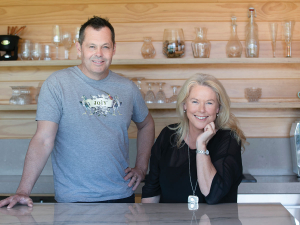 Bringing Joiy to the world just got easier, as one of New Zealand’s largest exporters of canned wine leaps into the North American market.

Joiy Wines already produces more than 700,000 cans for five markets each year, and is the top-selling canned wine in Canada, on track to double its annual sales volume this year.

Now the Wairarapa company has launched a multimillion expansion into the United States, after an approach by retail chain Wholefoods. Chris Archer, Joiy’s Winemaker and co-founder, says success in the US market could see Joiy’s production volumes increase to more than seven million units per annum. “I started out making wine at the age of 17 and I’m proud of how far we have come,” he says. “Joiy was all about making wine accessible to all people for all occasions, not restricting it to ‘on-the-table’ and the sometimes daunting prospect of opening a full standard bottle.” The international market for canned wines is growing at a rate of 13 percent per annum and is projected to reach over $807 million by 2028.