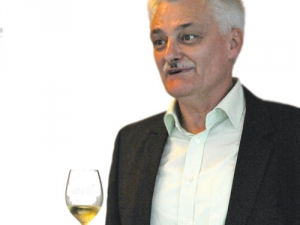 Metamorphic rocks and shallow schist soils are never far from mind in Central Otago where the wineries are enveloped in the dramatic physical presence of both.

This year, they formed the headline topic of the final day’s tasting at the Central Otago Pinot Noir Celebration 2015: ‘The impact of soil on the shape of a wine’.

The focus of the session was how – and how to quantify that ‘how’ - the region’s soils influence the flavour, body and style of Pinot Noirs made from grapes grown there.

Fourth generation vigneron Matt Dicey chaired the discussion about metamorphic rock, degraded schist soils and their impact on the region’s wine styles. It included debate about how best to communicate the impact these soils have on the nutritional uptake of the vines growing in them. And also a detailed discussion about which specific flavours in wine are attributable to the soils in which grapes grow.

The session also had a practical focus; a tasting of one Chilean Pinot Noir and five German Spatburgunders (also known as Pinot Noirs), led by German Master of Wine Frank Roder.

“Everybody knows that Germany is famous for Riesling but Spatburgunder is fairly unknown in the world,” says Roder.

His talk began with an overview of Germany’s vineyard area, which currently totals 102,425 hectares. This figure means that Germany has just over three times’ the number of hectares planted to grapevines than New Zealand has. Of that number, 66,223 hectares in Germany are devoted to white grapes and 36,313 to black grapes.

Of the white grapes planted in Germany, over 50% are Riesling. And of the black, Pinot Noir is now a significant portion of the total plantings, which Roder says is largely due to the effects of global warming.

Germany’s climate appears to have altered dramatically in the past three decades, said Roden.

“The phases of grape ripening in Germany between flowering and full ripening are now a lot earlier; the bud break and vegetation is also earlier and all up, we are starting to harvest up to four weeks earlier in the past two decades than previously. Until the early 1980s, ripening was a crucial factor for German grapes.”

The last vintage in Germany that was categorized as being ‘bad’, due to lack of ripeness, was 1981, he said.

“Full ripeness has been achieved year by year in Germany since then.”

“It is not only a high quality producer of Pinot Noir, but also a volume producer,” said Atkin, who suggested that the metamorphic soils in Germany provide a different structural framework for Pinot Noir grapes than limestone and clay do.

“The problem with this concept is that we live with it in a clay/limestone-centric world. Most of the great Pinot Noirs of the world are planted on clay and limestone, so we are looking at something very different in these wines, which come from metamorphic soils (like Central Otago’s). And these types of soils are mostly found in very hot regions such as the Douro in Portugal; Priorat in Spain; Cote Rotie in the northern Rhone; St Chinian in the Languedoc and other regions,” says Atkin.

Roden agreed that soils were one of the keys to the quality of German Spatburgunder today, but there were other critical factors too.

“Site selection is the key issue for success in Germany. It is not only the soil that is making good wine; it is the vineyard and the terroir; clonal selection is very important too, in terms of selecting the right ones with small berries and loose bunches.”

The 2015 Central Otago Pinot Noir Celebration contained many other highlights this year; one of the best being the collaborative spirit that emerged at numerous tastings and meals; particularly at a relaxed lunch at Mount Edward Winery, where local winemakers produced and served not only the liquid in our glasses, but also the food on our plates. Duncan Forsyth, Matt Dicey, Sarah Kate and Dan Dineen provided food they had made that was as fascinating as it was delicious.