A shared life at Mahi 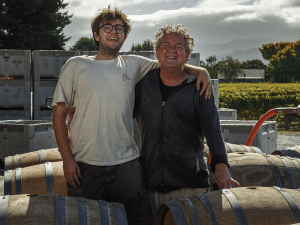 Max and Brian Bicknell during the 2022 vintage. Photo by Jim Tannock.

When Max Bicknell unexpectedly found himself in charge of an upstate New York winery - its winemaker trapped in Australia by Covid-19 - his dad's scrawled notes in a textbook proved a lifeline.

The 25-year-old realised then how much he'd learned "through osmosis" growing up around his parents' Marlborough winery, Mahi, and how much more he could glean from his father Brian Bicknell. "There were a lot of emails and phone calls to dad asking for advice. He sent me his battered and taped-up copy of Making Good Wine by Bruce Rankine, which he used when he was studying in his 20s, and so being able to read through that and seeing notes that he'd taken... that was quite cool."

When he returned the textbook in person in mid-2020, it marked the beginning of Max's involvement in a family business that until then had been a "slow burner", says Brian, who established Mahi with wife Nicola in 2001. “When we got Mahi going, there was never any pressure or consideration in terms of succession... As they grew up, it wasn’t something we talked about,” he says of Max and his sister Maia, who remains involved in “big picture” decisions from Auckland. “The best things happens when you don’t plan for it.”

Max’s childhood memories were of mum and dad picking during the school holidays, the red ferments being the perfect warm temperature for a swim, teenage years around vintage crews, plunging, and occasionally bud rubbing.

He left home, got a law degree, travelled and worked in hospitality, and father and son met in far-flung locations, attended tastings together in London, and slowly unfurled future possibilities while sitting by a canal in the Netherlands.

For buyers and consumers, the authenticity of a family business, and the continuity, appeals greatly, says Brian, who has worked with some distribution partners for decades, across 16 countries. “We see a real appreciation, that there is succession... It’s not something we’ve gone out to do actively, it’s worked, and this idea of a longterm business is really interesting.”

“We’re not doing it for the marketing spin,” adds Max. “It’s how we see the wine industry and it works for us, and we’re lucky that it translates into the market.”

Back in the winery, where Max works in every aspect of the business from mowing to big picture decision-making, discussions about whether to separate work and family life quickly led to the realisation that “that’s not how it works”, says Brian, and that the father-son relationship would simply evolve. “Wine is very much a part of you... The work life balance is that this is our life, and we love it.”

Brian Bicknell is carfully watching the shifting landscapes of hospitality around the world, hoping to gauge the strength of Mahi's markets.